Cyclist rides by part of the Water Under the Bridge installation, by Beth Clevenstine and Paul Santoleri, on the Manayunk Towpath in Philadelphia. Steve Weinik/Mural Arts Philadelphia photo

Three days of talking trails, learning from others' work, and deepening partnerships left attendees proclaiming our first-ever Mid-Atlantic Greenways & Trails Summit a success. "Thank you, @ECGreenway & other presenters and organizers," tweeted attendee Tony Goodman as he made his way home to Washington, DC. "I'm ready & inspired to continue our work for more & better trails." A panel of local Circuit Trails leaders and advocates opened our program Thursday evening, followed by a keynote address Friday morning from Mitchell Silver, parks commissioner for New York City. Dozens of breakout sessions filled the day, and at lunch we rolled out a new report quantifying the impact of completing the East Coast Greenway in the Greater Philadelphia region.

Report: Investing in Our Future

Completing the East Coast Greenway in the Delaware River Watershed would generate an impact of more than $3 billion in public health, environmental and economic benefits for greater Philadelphia, according to a study unveiled at the inaugural Mid-Atlantic Greenways & Trails Summit in Philadelphia. The study was conducted by consulting firms NV5 and Econsult Solutions, Inc., on behalf of the East Coast Greenway Alliance.

Request a printed copy of report 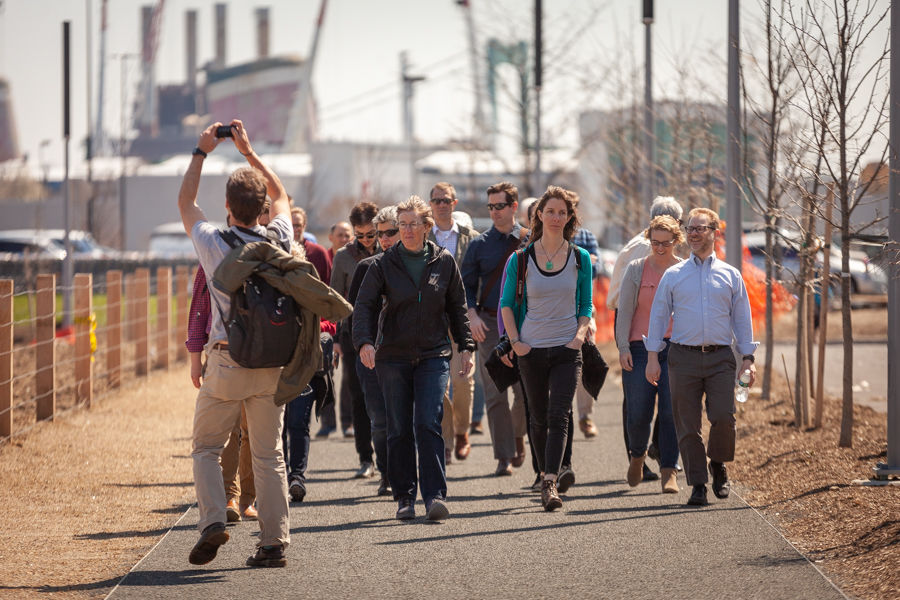 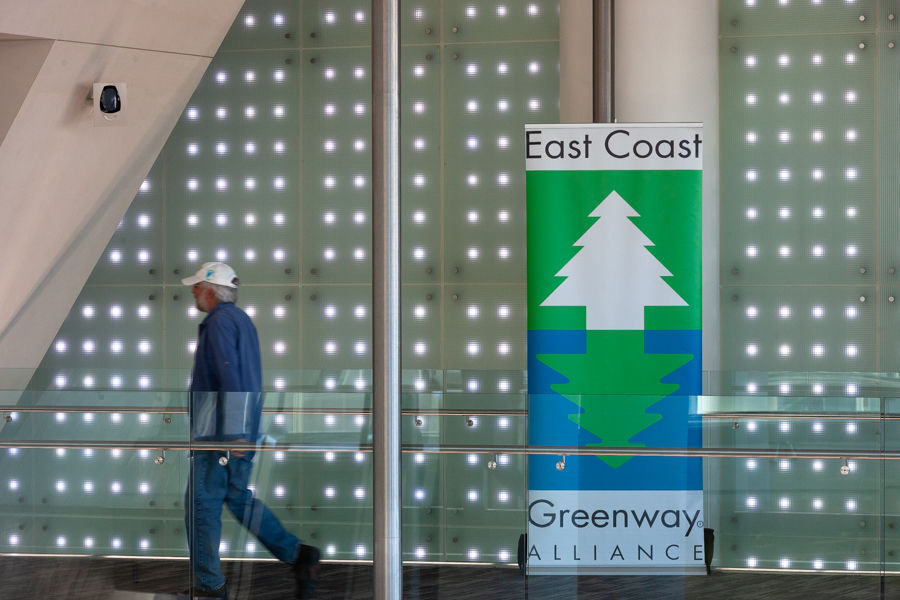 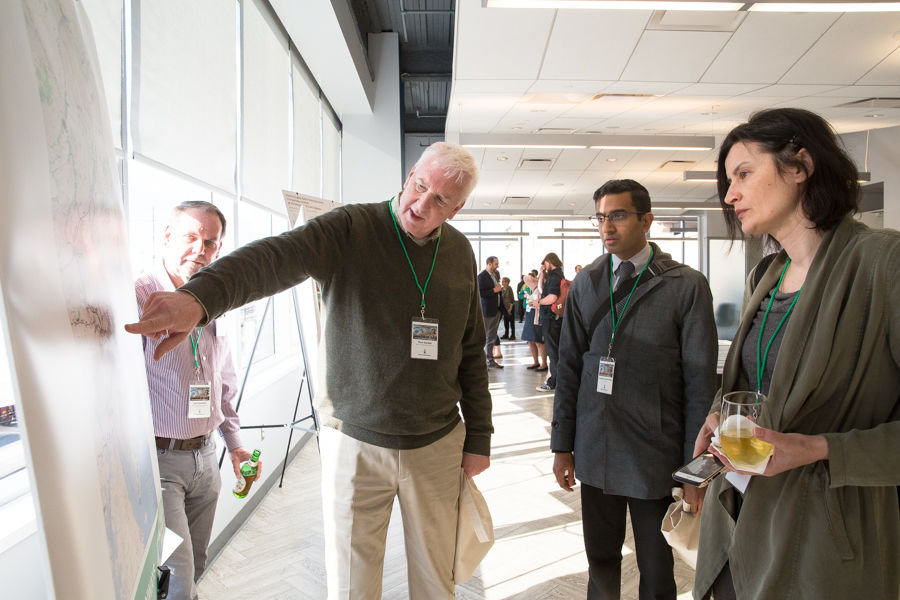 Viewing posters at the Thursday evening reception in Cira Centre 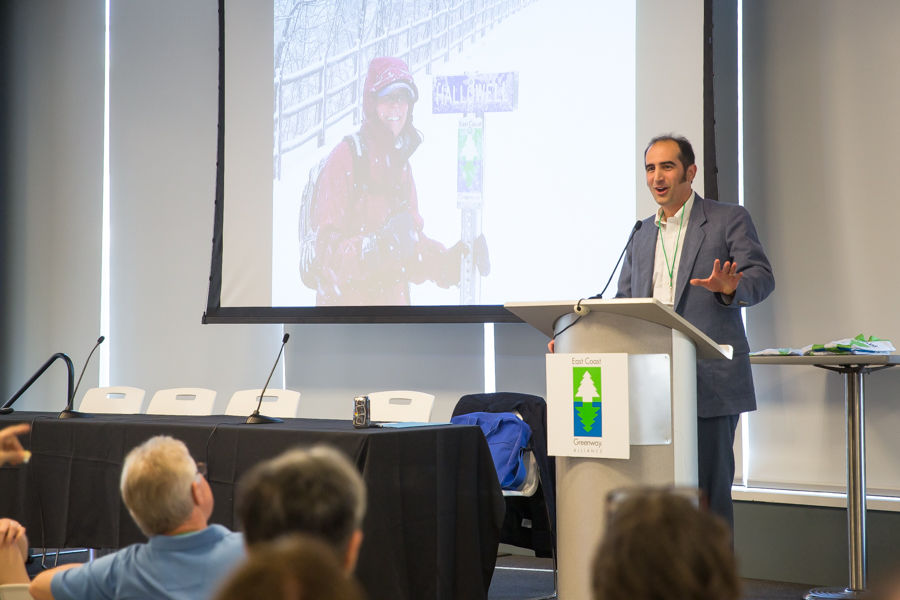 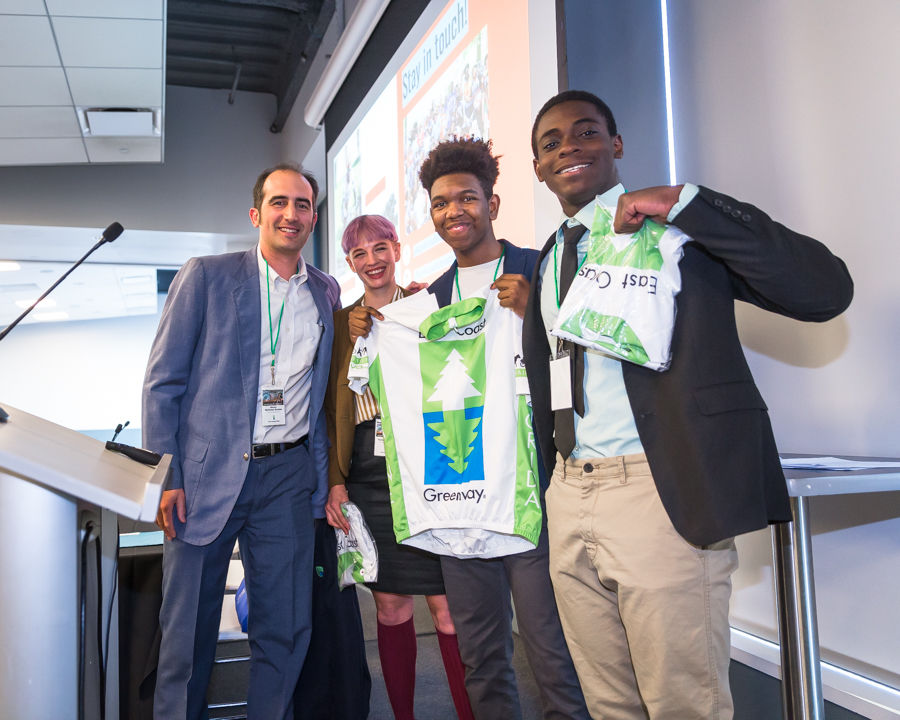 Executive Director Dennis Markatos-Soriano presents Greenway bike jerseys to Taylor Kuyk-White, youth cycling manager for Bicycle Coalition of Greater Philadelphia, and Emir Johnson and Jahmiel Jackson, members of the Youth Advisory Committee who welcomed Summit attendees and shared their stories of what cycling means to them. 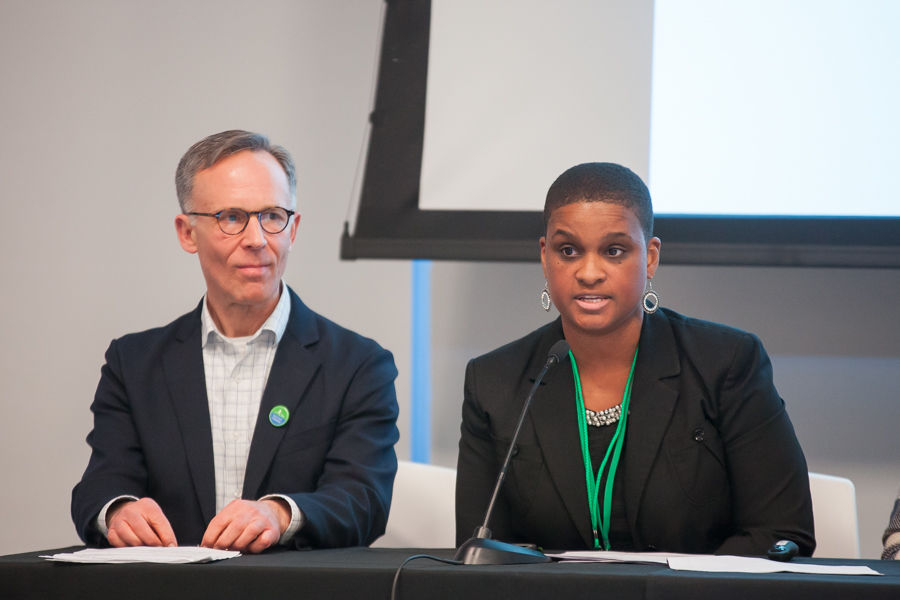 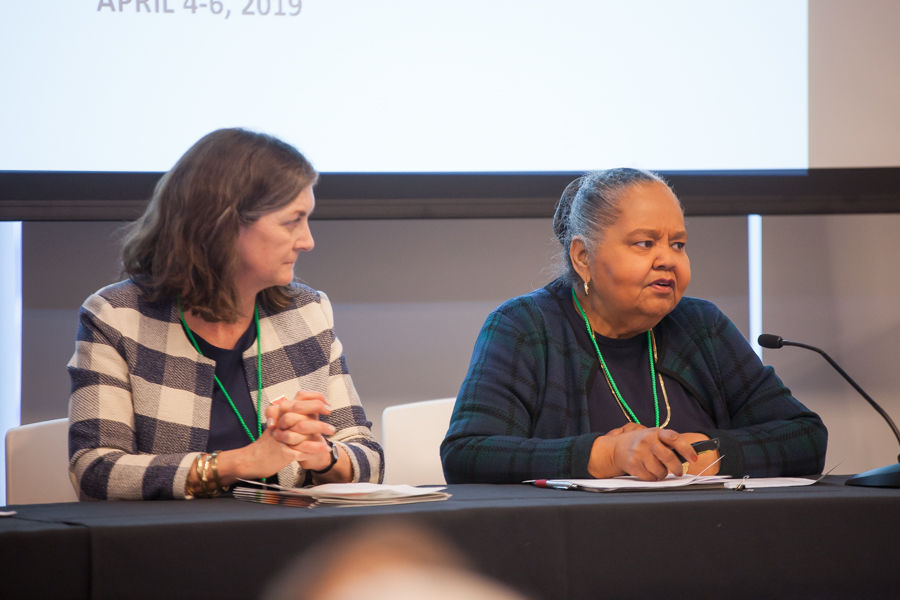 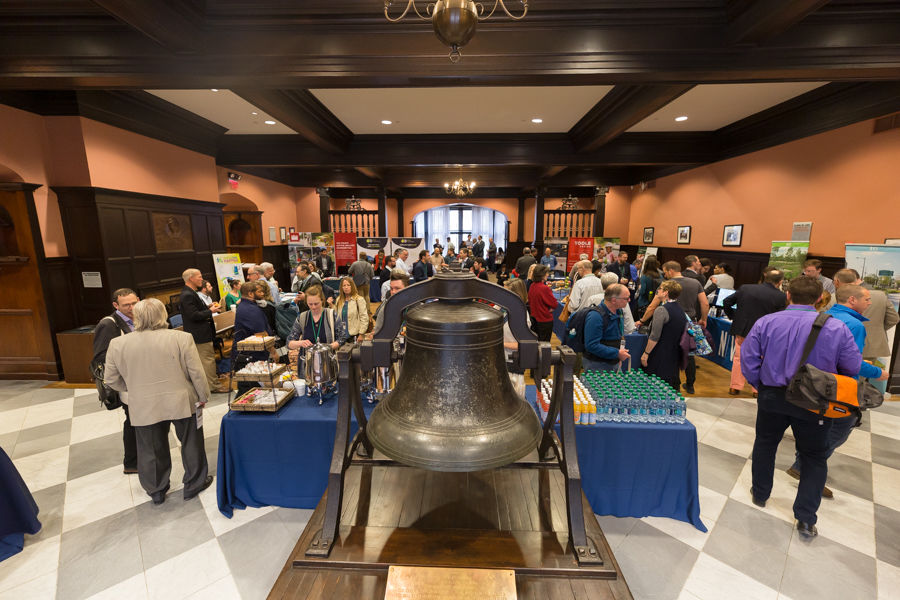 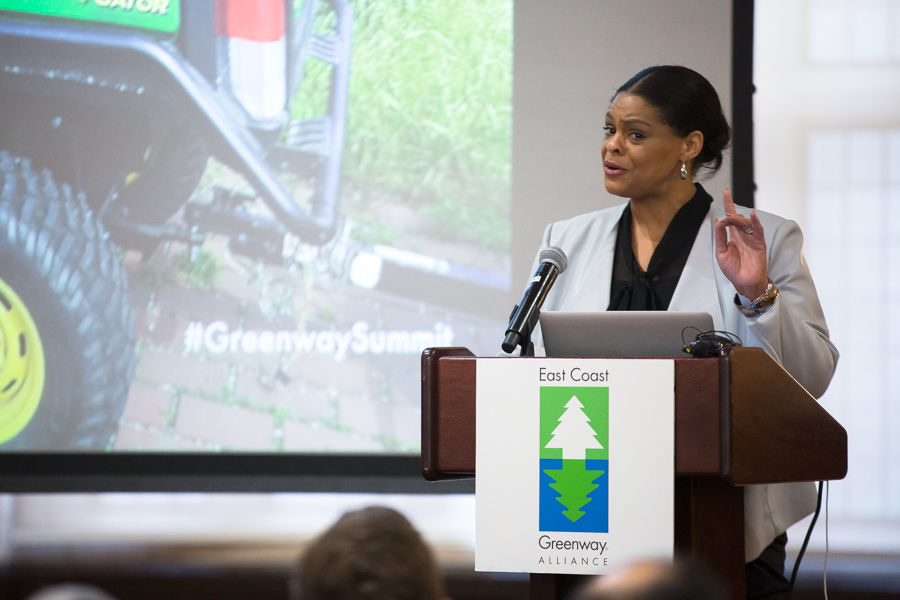 Angela Foreshaw-Rouse, manager of state operations and community outreach for AARP Pennsylvania, welcomes attendees on Friday morning. "Welcome to the City of Brotherly Love AND Sisterly Affection," she told the crowd. 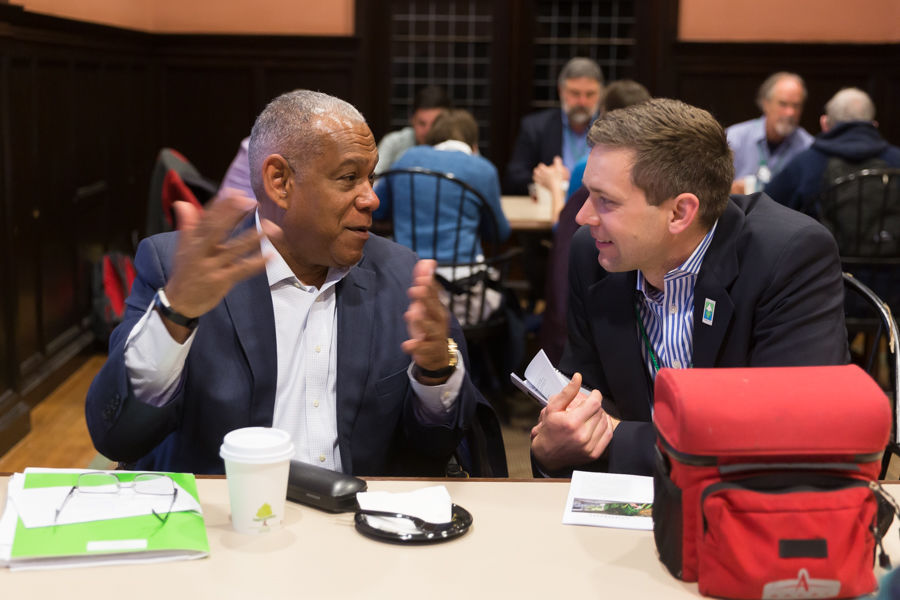 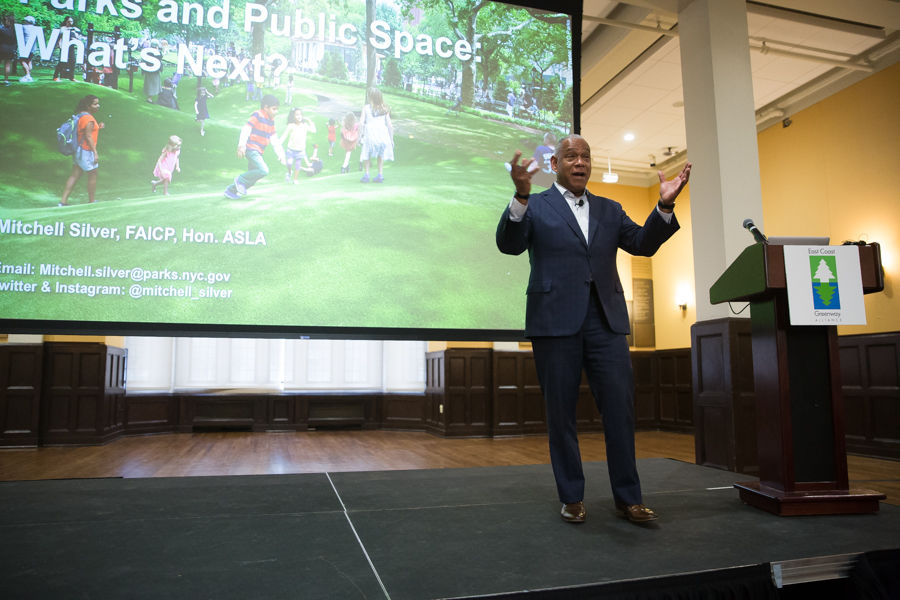 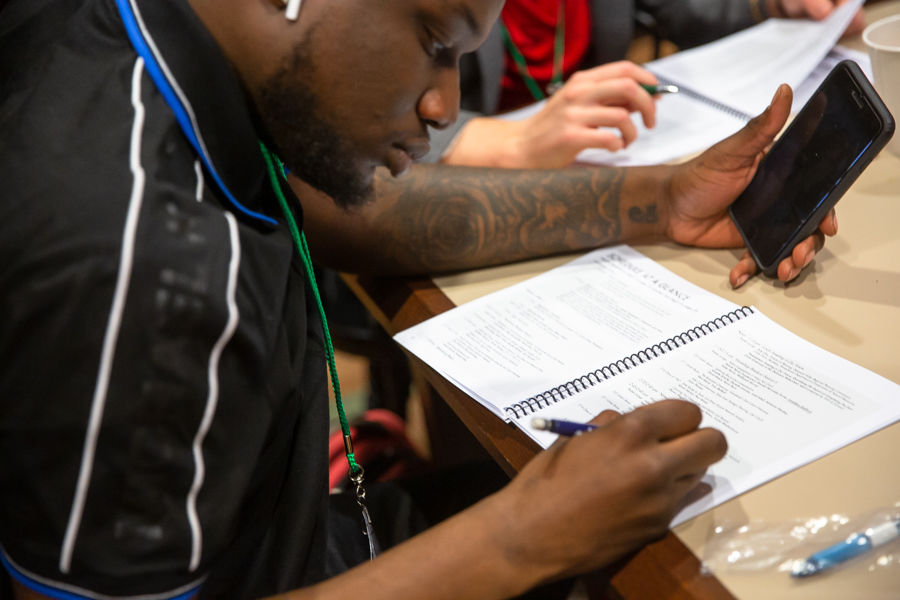 Plotting out which breakout sessions to attend 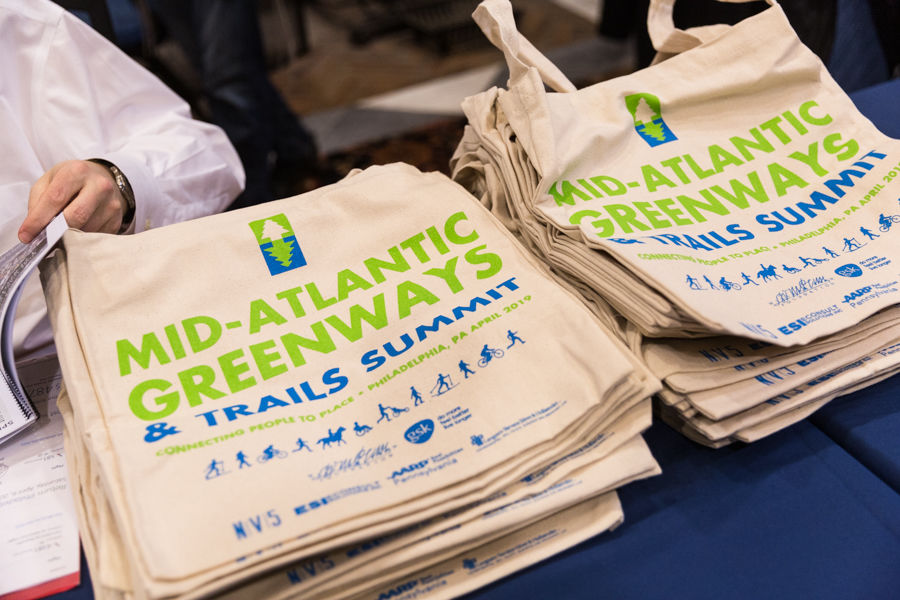 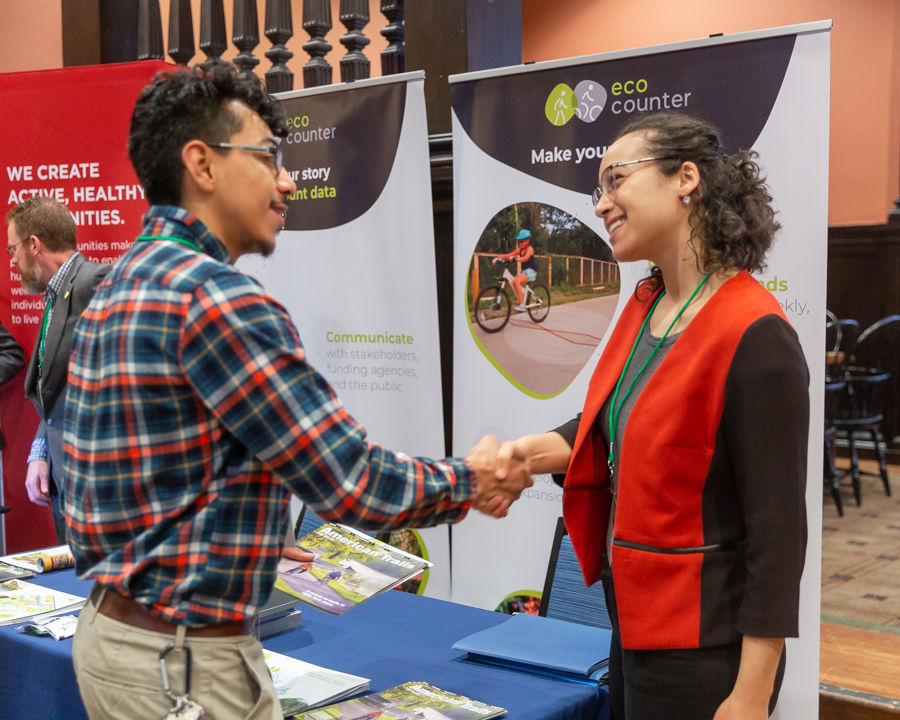 Visiting sponsor tables at the Expo Hall on Friday 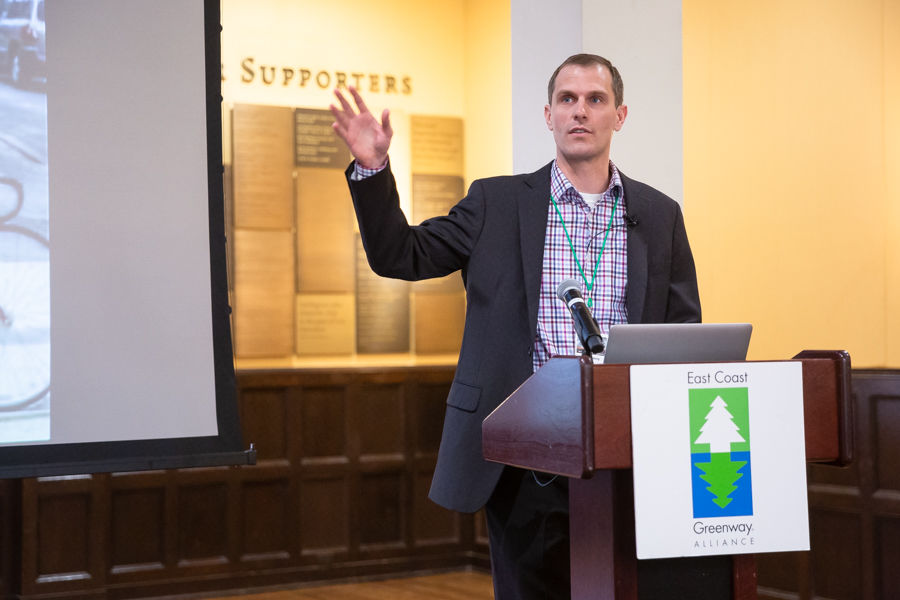 Matt Ludwig, an NV5 engineer and planner, introduces the regional impact report, "Investing in Our Future," that he and his team prepared for the East Coast Greenway. 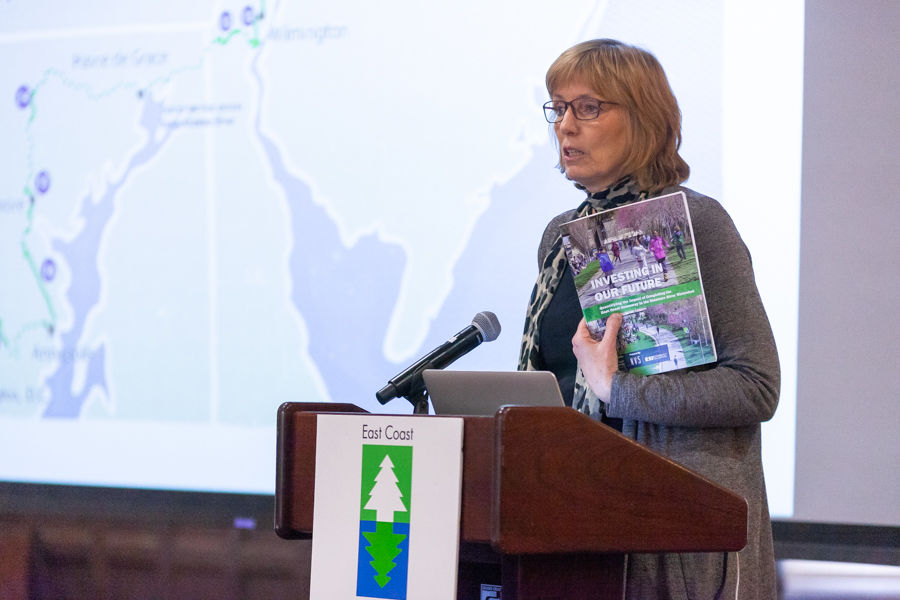 Cindy Dunn, secretary of Pennsylvania's Department of Conservation and Natural Resources, addresses attendees at lunch and the unveiling of our Delaware River Watershed impact report. 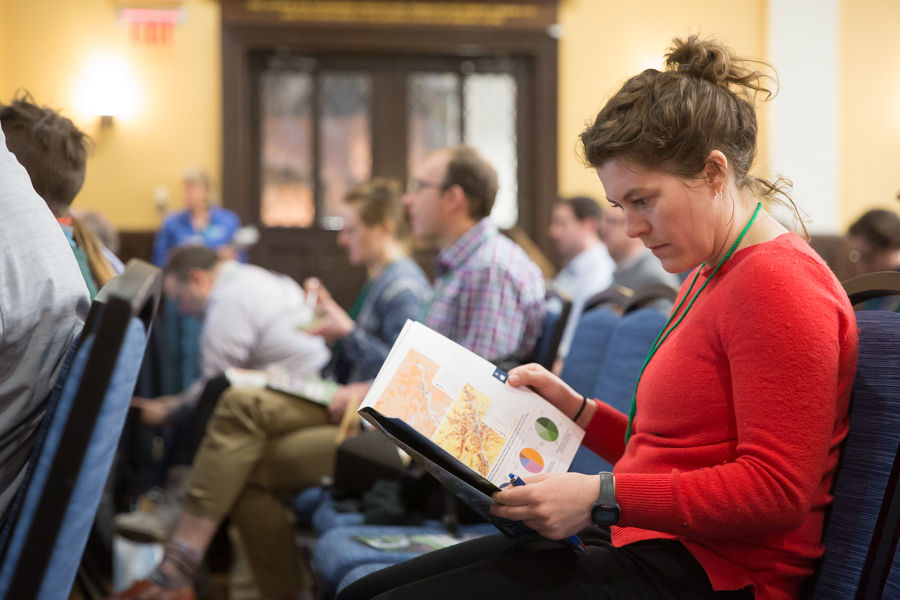 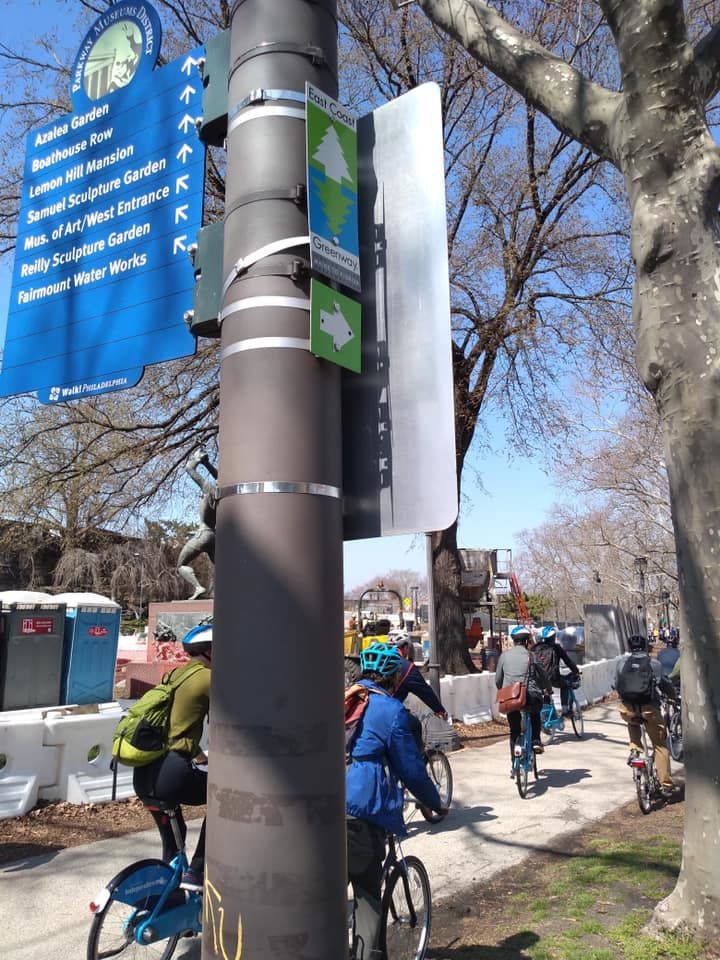 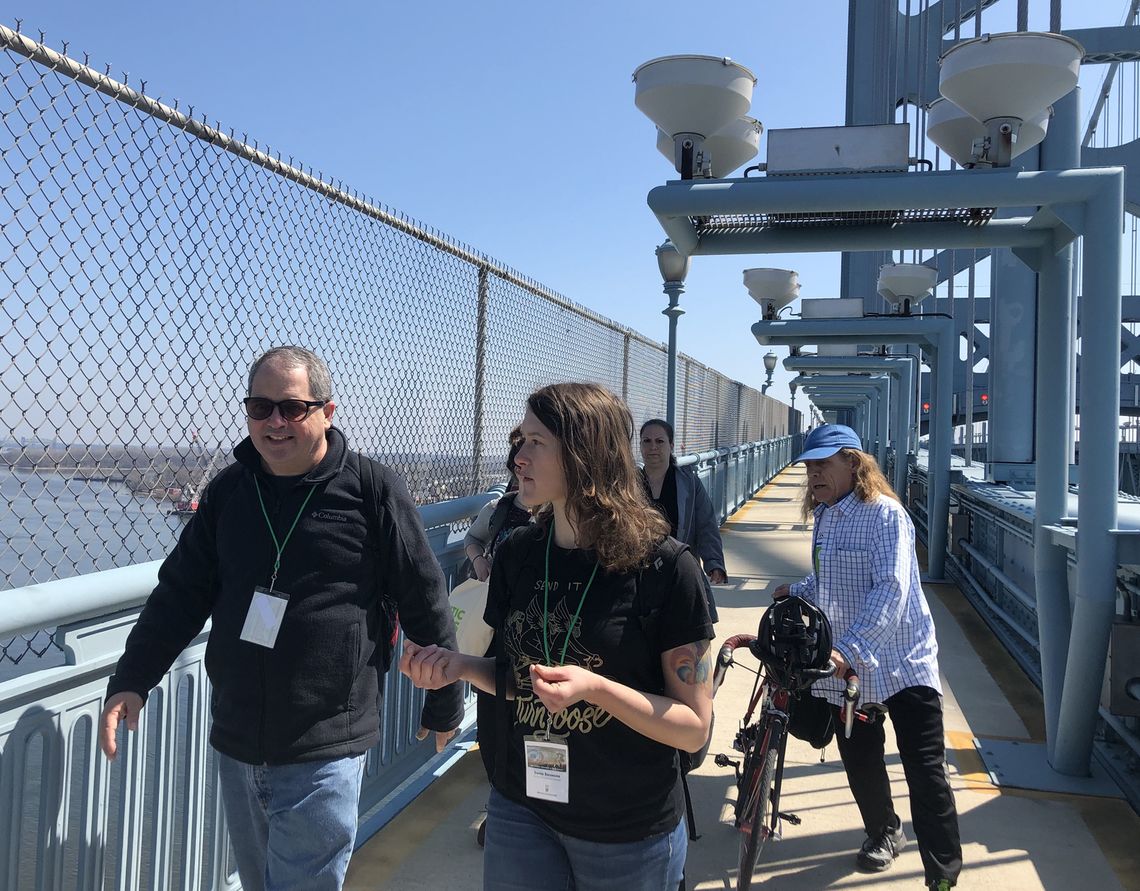 John Boyle, research director for Bicycle Coalition of Greater Philadelphia, and Sonia Szczesna, South Jersey program coordinator for the Tri-State Transportation Campaign, led a dozen walkers from the Camden Waterfront across the Ben Franklin Bridge to Philadelphia on Saturday morning. 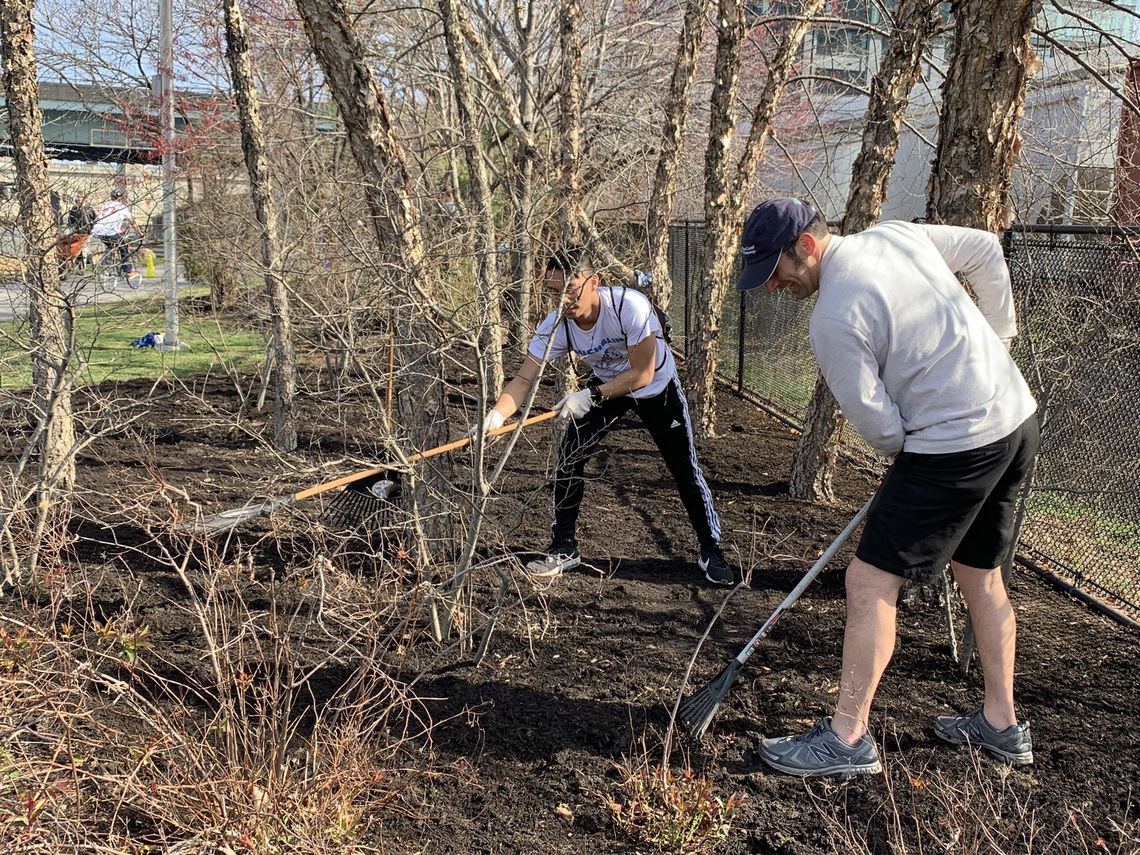 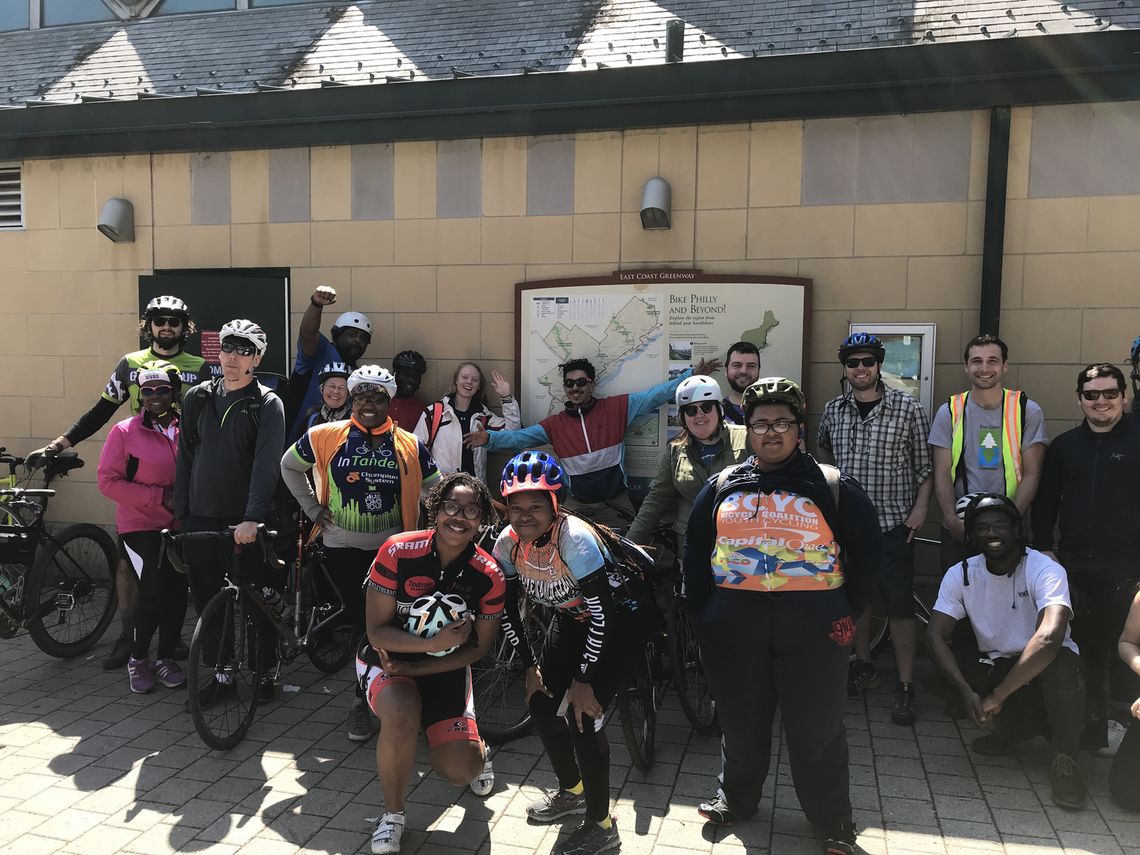 Youth Advisory Committee members of the Bicycle Coalition Youth Cycling Program led a bike tour on Saturday for Mid-Atlantic Summit attendees, leading them from the art museum steps to the program's new headquarters and back. They pose here by a sign about the East Coast Greenway on the Schuylkill River Trail. 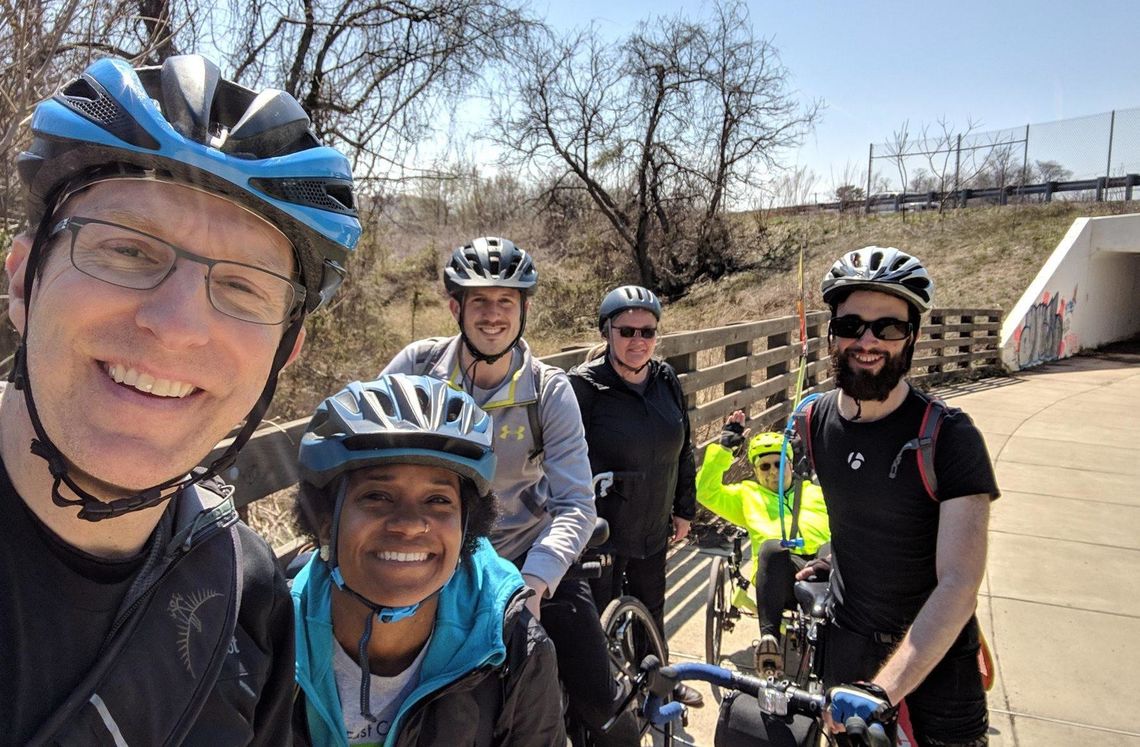 A group of cyclists rode a SEPTA train to Bucks County and biked back on the D&L Trail on Saturday. They were led by Nate Dorfman (right), trails coordinator at Pennsylvania Environmental Council, and included Devin Cowens (center), our summit and events specialist. 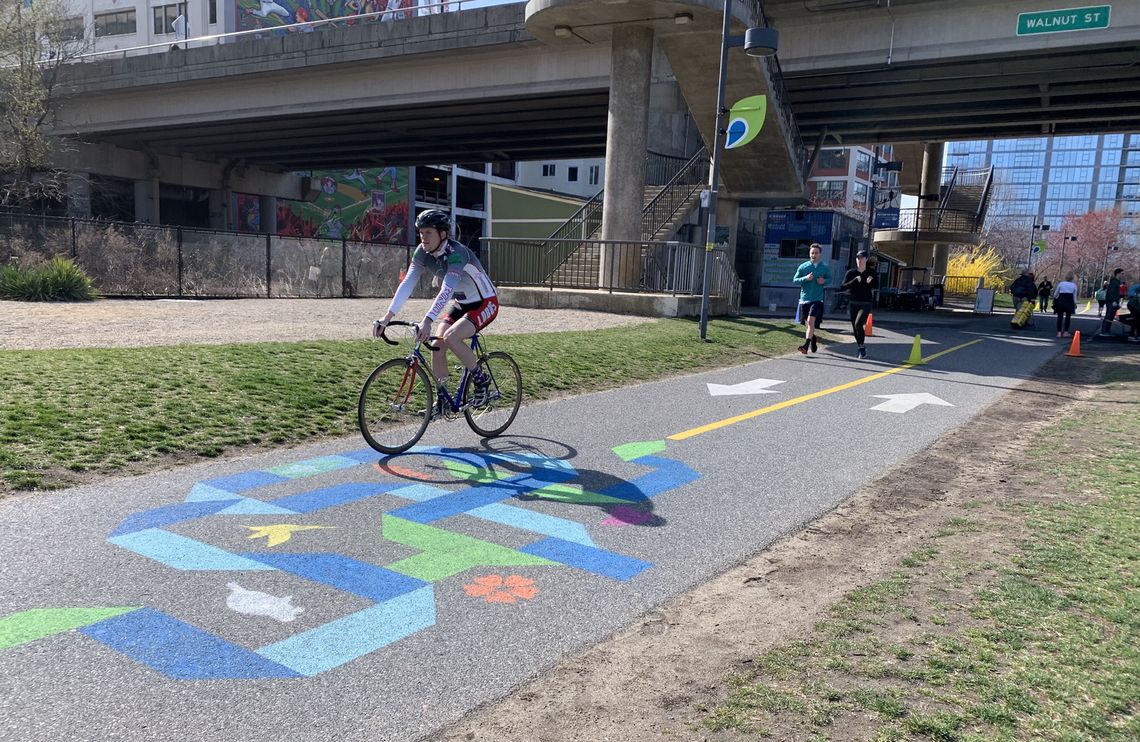 Cyclists and runners pass a chalk-art mural that artist William Woodsey created for the East Coast Greenway along the Schuylkill Banks trail in time for the Summit. The art, including the Greenway's logo, is also visible from above on the Walnut Street bridge.

The Summit offered a full day of workshops, panels, and keynote along with biking, walking, and bus tour mobile workshops. Thanks to all who shared their expertise, experiences, and insights.

Paul Santoleri and Beth Clevenstine know how greenways, like public art, can transform communities and encourage interaction and pride. With a recent project on Philadelphia’s Manayunk Towpath, they’ve seen art and trails help a community reclaim its open space.

Thank you to our summit sponsors 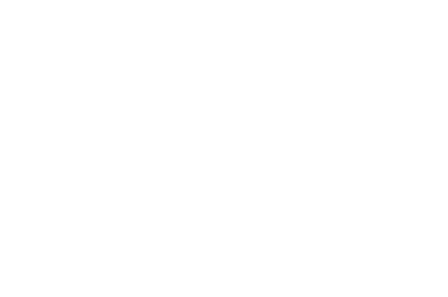 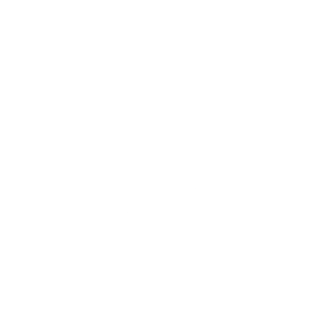