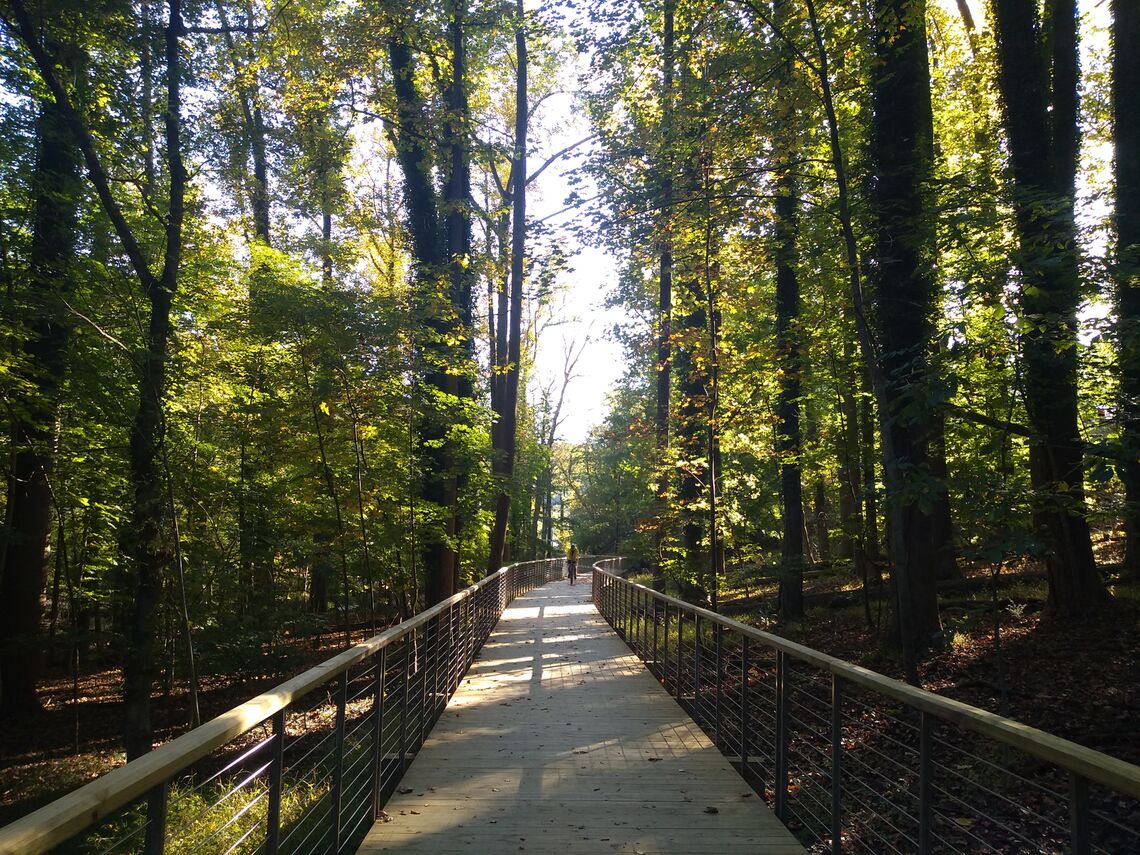 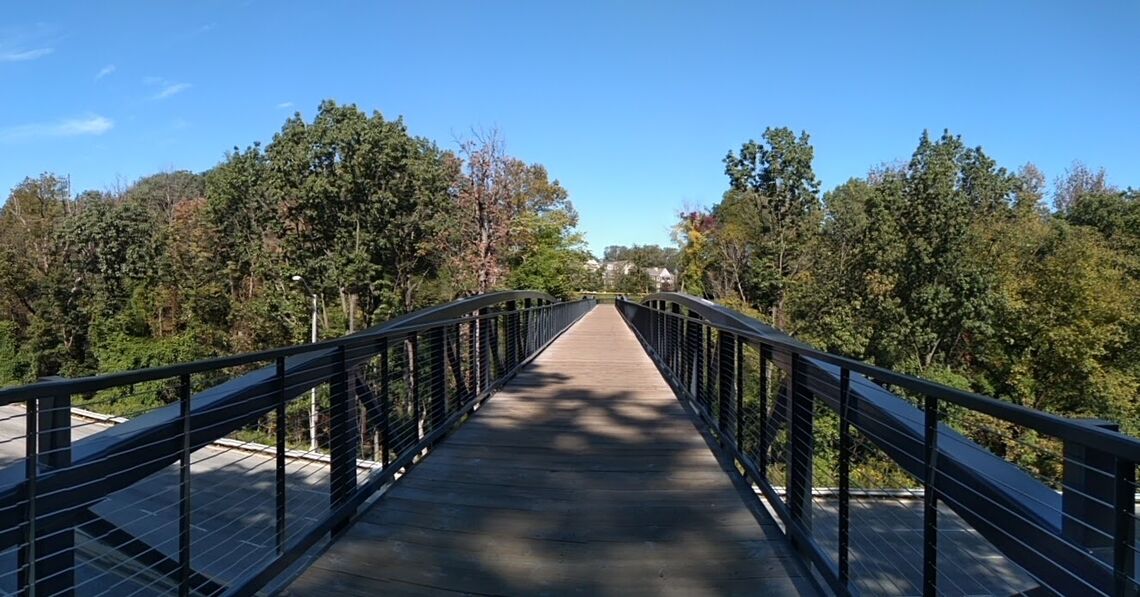 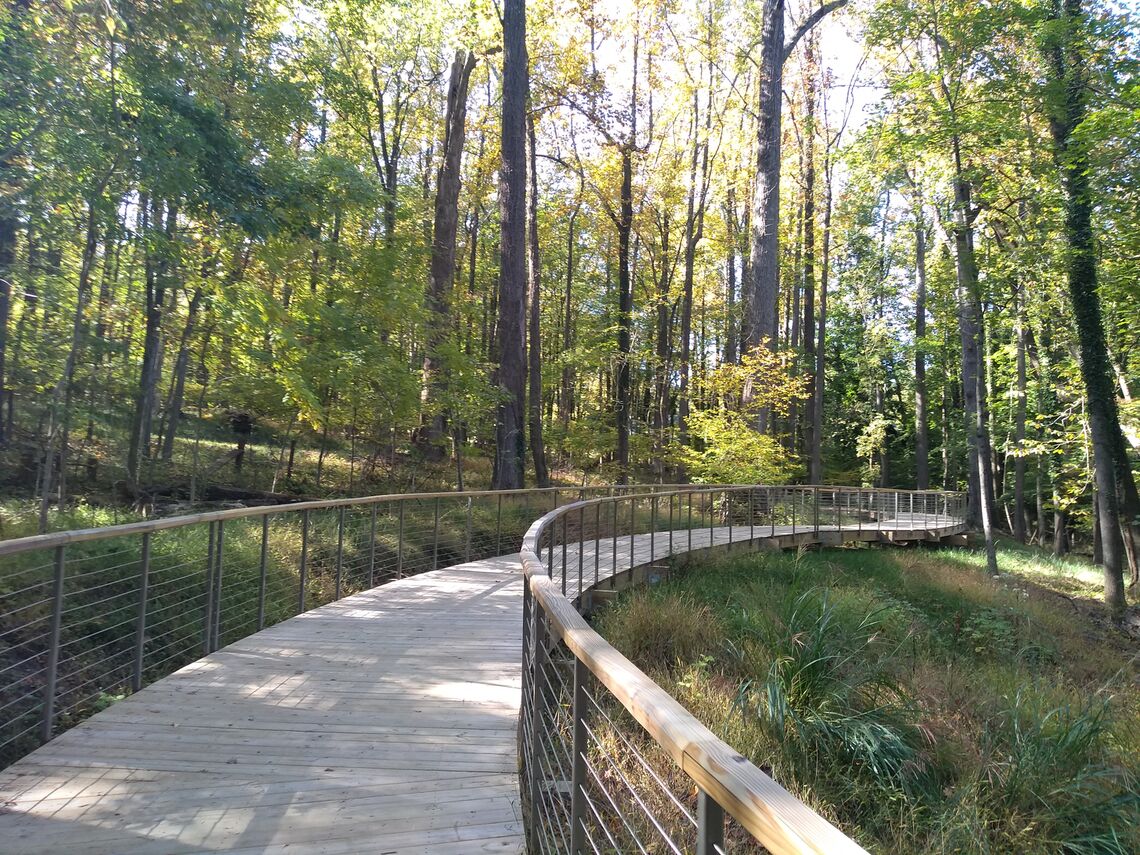 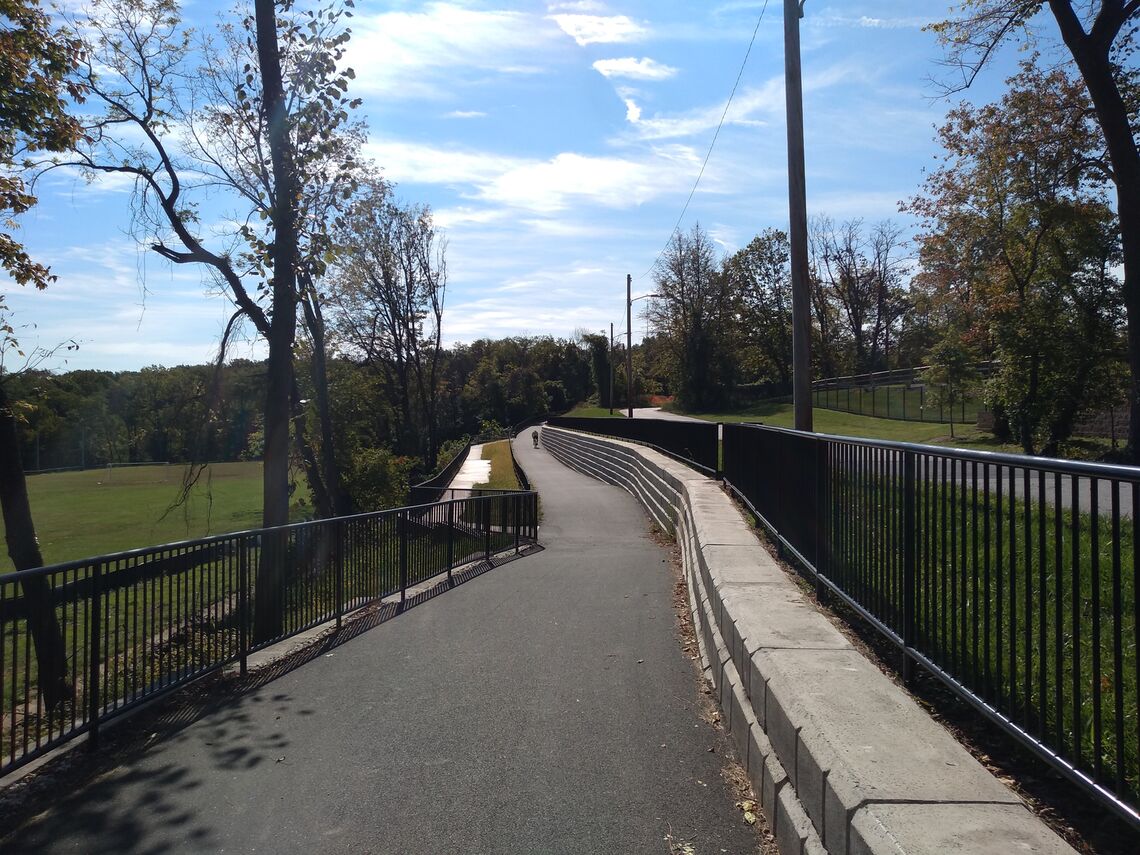 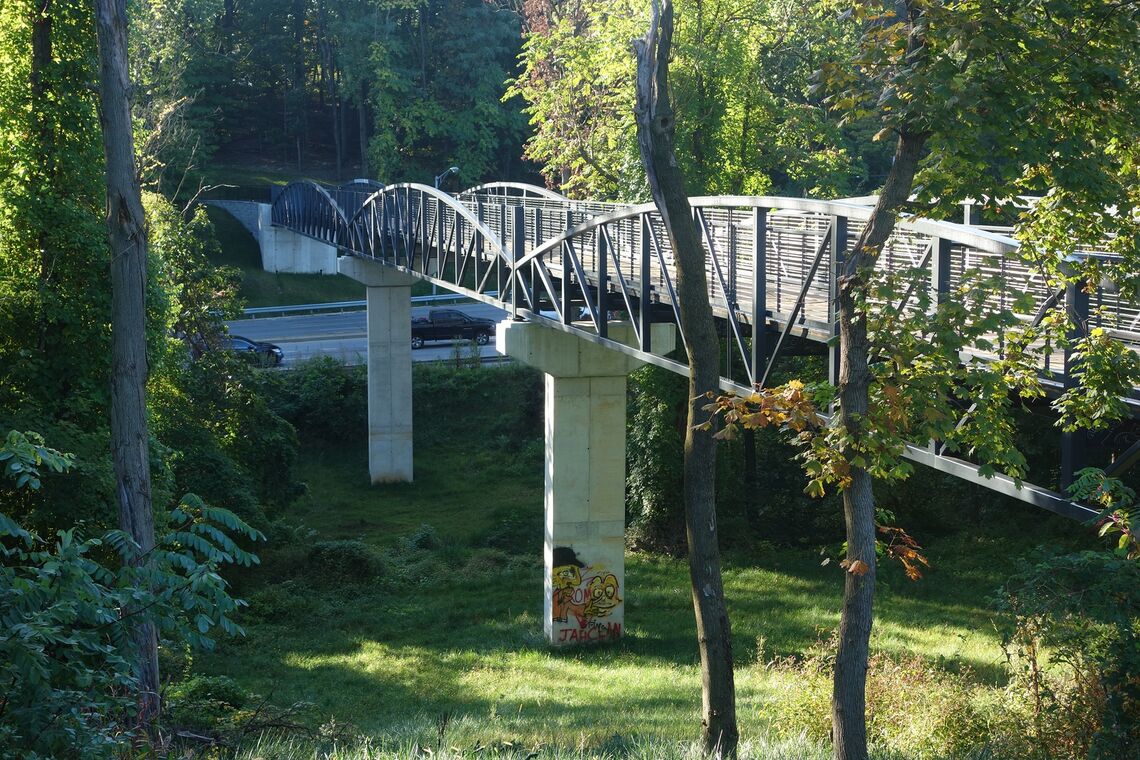 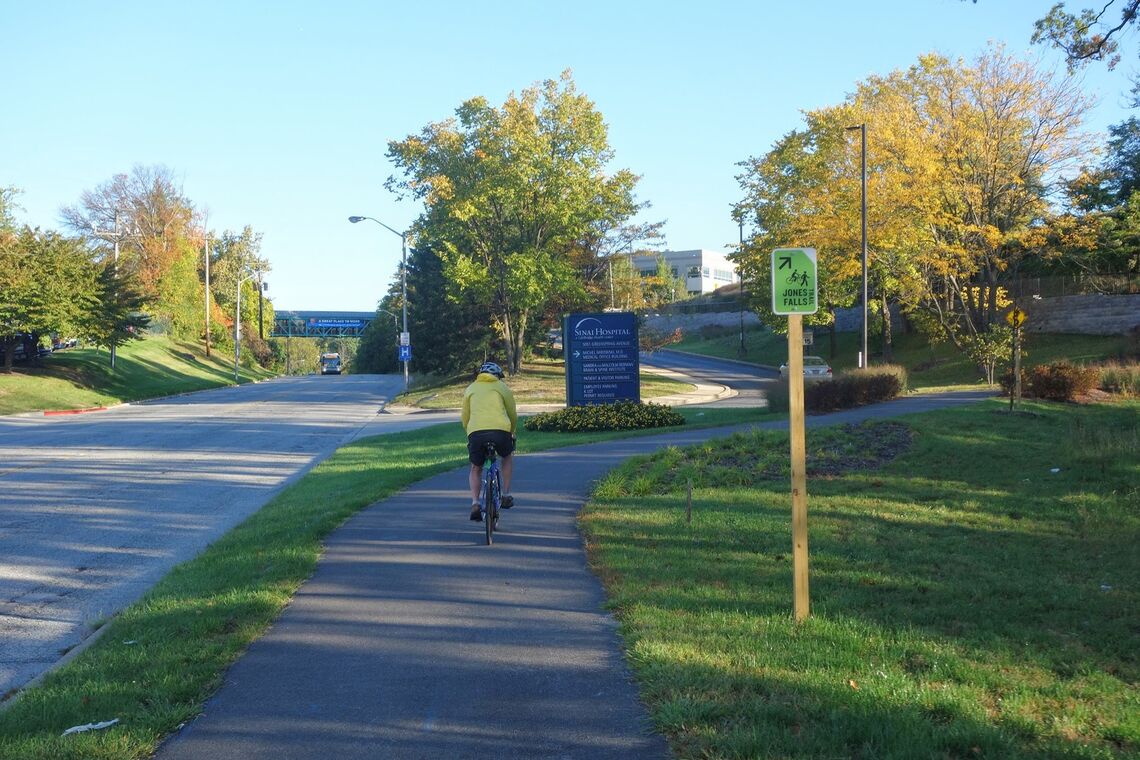 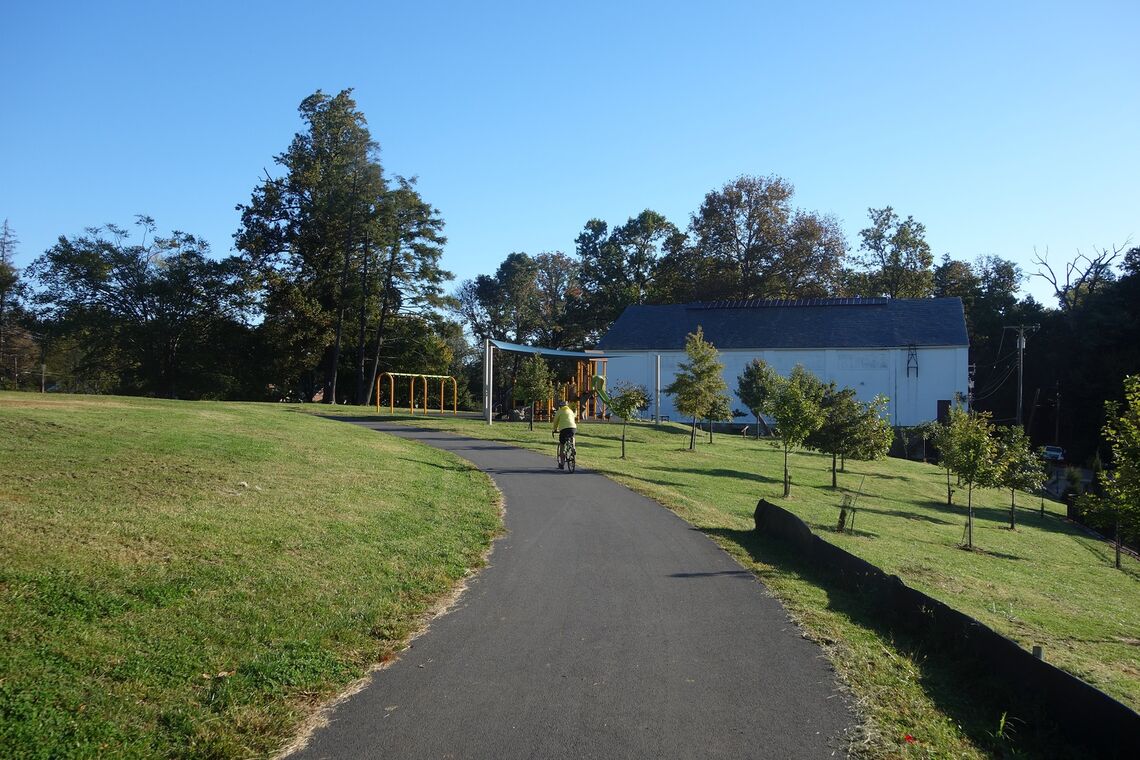 Big things are happening for East Coast Greenway goers in Baltimore. The City of Baltimore has recently constructed a new 2-mile segment of the Jones Falls Trail in North Baltimore, extending it from the Cylburn Arboretum northward toward the Baltimore County line. This addition brings Baltimore’s completion of the East Coast Greenway up to nearly 70 percent through the city along about 13 miles of trail, following the Jones Falls Trail, Gwynns Falls Trail and Middle Branch Trail, with pending trail connections to the north and south of the city.

The Jones Falls Trail begins by the Inner Harbor in downtown Baltimore and extends 10 miles north. Named for the Jones Falls waterway that cuts through the city, the trail has been constructed in five phases, with plans dating back to the 1990s. Pushing the city each step of the way have been long-time local advocates like Greg Hinchliffe, a former Maryland Chair of the East Coast Greenway and advocate with the local advocacy group Bikemore. This new Greenway segment is part of the fifth phase, but Hinchliffe and other advocates are looking to connect the trail out of the city to Lake Roland Park and eventually all the way to the Torrey C. Brown/Northern Central Railroad Trail.

Additionally, the new segment brings the previously built fourth phase, a 1.7-mile segment from Woodberry to the Cylburn Arboretum, onto the Greenway travel route. Although it was completed in 2013, that segment has long been disconnected from continuing northward by the busy Northern Parkway. The new trail extension passes over the parkway with a 400-foot-long bicycle and pedestrian bridge built with steel arches, helping runners, walkers and cyclists safely cross the parkway.

The southern end of the new phase starts outside of Cylburn Arboretum and climbs up and around the parking lot of the Michel Mirowski Medical Office Building of the Sinai Hospital Campus. It crosses over Northern Parkway, connects into Northwest Park and follows a short on-road section along Rogers Avenue. Trail users will then discover an elevated, wooden boardwalk through a forested area where they may forget they are in the city for a few moments. The Greenway’s portion of the trail ends at Kelly Avenue, where travelers can cross into the center of Mt. Washington neighborhood and its light rail station. Additionally, a spur trail of the Greenway was built as part of the extension, extending westward of Mt Washington through Western Run Park.

This phase was funded mostly with federal dollars and also by the state of Maryland and City of Baltimore. Its proximity to residential areas and businesses makes it a convenient way to travel outdoors whether for recreation or transit to jobs.

“The Jones Falls Trail is connecting parks and open spaces that were previously disconnected and also shadows the light rail, so it provides equitable active transportation options for people to bike, to walk and also take transit. It helps people who don't have access to vehicles or just want to leave their car at home. It’s a beautiful trail for people who go out and find it,” said Daniel Paschall, the Greenway’s Mid-Atlantic Coordinator.

As outlined in the East Coast Greenway Alliance-led Greenway Stimulus campaign, construction projects like these support many good-paying jobs for local residents. And similar projects in the region and across the country can provide equitable access to nature, healthy lifestyles and jobs that spur a strong recovery.

The extension of the Jones Falls Trail is not alone in upcoming additions to the trail system in the region. Completion of this trail further connects the growing Baltimore Greenway Trails Network, a planned 35-mile trail network to link 80 neighborhoods across the City of Baltimore, as led by Rails-to-Trails Conservancy. Importantly, as noted in Bikemore’s #IBikeIVote campaign, Baltimore’s City Council President and mayoral candidate Brandon Scott has committed to completing the Greenway Trails Network and the Separated Bike Lane Network, creating access to parks and a safe transportation network for all users.

Many people and groups are supporting building trails in order to connect people and ideas in a sustainable, economically-feasible way.

A new report from Greater Washington Partnership and Rails-to-Trails Conservancy shares a $28 million plan to build and expand upon the existing trails in the Baltimore area, for a total of 35 miles of trails, would have immense economic and social benefits. Benefits include up to $48 million from construction, up to $113 million for local business activity and up to $314 million for aggregate residential property increase. Additionally, the trails would reduce traveling in cars by millions of miles, leading to environmental benefits like pollution decreases and less contribution to climate change. By walking, people could improve their mental and physical health, saving up to $2.4 million in health care costs. Further, expanding the trail network could reduce commute times. With a focus on equity, the plan will connect diverse groups of residents throughout the city to each other and to job opportunities.

In addition to the citywide network, the addition to the Jones Falls Trail is a significant step for Greenway and other trail advocates in making a push towards greater connectivity across Maryland.

“It’s an incredible trail for Baltimore but also something I’m hoping will spur a regional connection from Baltimore to Annapolis to D.C.,” continued Paschall. When complete, the East Coast Greenway will serve as the trunk trail for an interconnected network between Baltimore, Odenton, Annapolis and D.C. to continue providing economic and social benefits to people in these areas. The Greenway will link a continuous series of trails about 75 miles across the three cities, or about 50 miles directly between Baltimore and D.C., perfect for weekend adventures that can be shortened or lengthened by bringing bikes onto the MARC and Amtrak trains along the corridor.

Additionally, there is currently a gap between the Torrey C. Brown/Northern Central Railroad Trail in Baltimore County and the Jones Falls Trail in the City of Baltimore. The Greenway is working with local advocates to build support and complete a feasibility study of the corridor.

Notably, the new segment of trail is not officially complete, as construction crews are putting the final touches on sidewalk connections at the northern end. Please check in with the Baltimore City Recreation and Parks Department for official announcements on the trail opening.

"With the increase in use during the pandemic, we are proud that Maryland's East Coast Greenway is making major progress and providing equitable access to the outdoors for mental and physical health in these tough times," said East Coast Greenway Executive Director Dennis Markatos-Soriano.