President Joe Biden has proposed a $2 trillion climate plan, and investment in sustainable modes of transportation - including greenways and trails - is a significant way to mitigate climate change.

The total estimated cost of these projects is $812 million. Recent studies along the 3,000-mile East Coast Greenway show a more than ten-fold return on investment.

Maine: An extension of the Eastern Trail ($) from its current terminus at Kennebunk Elementary School all the way through the Town of Wells would achieve 30 miles of completed Greenway in Southern Maine. It would also create a nearly continuous off-road trail corridor from Wells to South Portland. The extension would make biking, walking, running and other activities safe, attractive and accessible for people who live in or are visiting Southern Maine’s lovely coastal region.

Massachusetts: The Mystic River Bridge ($$) is a proposed bicycle and pedestrian crossing over the Mystic River between Everett (an environmental justice community) and Somerville, just north of the City of Boston. It will be a transformative structure for the Boston area, connecting key multi-use pathways between these cities as well as connecting the Lower Broadway District in Everett, which includes the Encore Boston Harbor resort and DCR Gateway Park, to the DCR Draw Seven Park, MBTA’s Orange Line Assembly Station and Assembly Square in Somerville.

Rhode Island: The Trestle Trail ($) would upgrade and pave a 4.7-mile section to multi-use trail standards and to be ADA compliant, as well as connect directly with the Moosup Valley State Park Trail that CTDOT just finished at the Rhode Island border. This upgraded trail would close a major gap between the Moosup Valley State Park Trail in Connecticut and the 18-mile existing Washington Secondary Trail in Rhode Island.

Connecticut: From the New York state line to just short of New Haven, Connecticut, the 36-mile Merritt Parkway Trail ($$$) is envisioned to connect New York to Fairfield County and beyond in a protected corridor.

New York: The Bronx River Greenway ($$) is a 25-mile-long ribbon of green with a multi-use path that will extend along the full length of the river in Westchester County and the Bronx.

New Jersey: The Essex-Hudson Greenway ($$$) is a 9-mile connector from Jersey City to Newark along the abandoned Boonton Line of the Norfolk Southern.

Pennsylvania: The Spring Garden Street Greenway ($$$) is a transformative 2.2-mile project that will connect the Schuylkill Banks to the Delaware River Trail across the heart of Philadelphia, creating a safe, all-ages biking and walking connection for the growing residential and commercial corridor.

Delaware: The North Claymont Greenway ($) is integral to the revitalization of a former steel site in Claymont with regional rail connections and regional access to Philadelphia and Wilmington.

Maryland: The Susquehanna Crossing ($$$) is a walking and biking path over the Susquehanna River that connects Havre de Grace to Perryville. It would complete one of the most challenging gaps in the region and the entire East Coast Greenway. The cost estimate depends on whether this trail would be a standalone bridge for biking and walking (or set of bridges) or if it would be a path added onto an existing or new bridge.

Virginia: Once completed, the Fall Line Trail ($$$) will span 43 miles of the Richmond metro area, running north-south from Ashland to Petersburg (see map).

North Carolina: The proposed NC-211 route of the East Coast Greenway (cost TBD) could add 17 miles of the ECG along the NC-211 corridor in Brunswick County, NC. A feasibility study is currently underway to determine the potential and costs of this addition.

South Carolina: A proposed connection between Georgetown and Hobcaw Barony ($) would include a 2.5-mile ferry and 8-mile sidepath linking downtown Georgetown to Waccamaw Neck Bikeway.

Georgia: A proposed connection between Darien and Brunswick ($) would be a 16-mile sidepath linking historic Darien's Highlander Trail to the Liberty Ships Trail in Brunswick.

Florida: Investing in safe walking and biking infrastructure, such as the 50-mile Core to Coast Loop ($$$), and encouraging the public to walk and bike provides a long-term, cost-effective solution to the climate crisis, public health and safety, and health equity in Florida. The state is experiencing increasingly severe storms and poor air quality from fossil fuel emissions, which affect the most vulnerable populations. 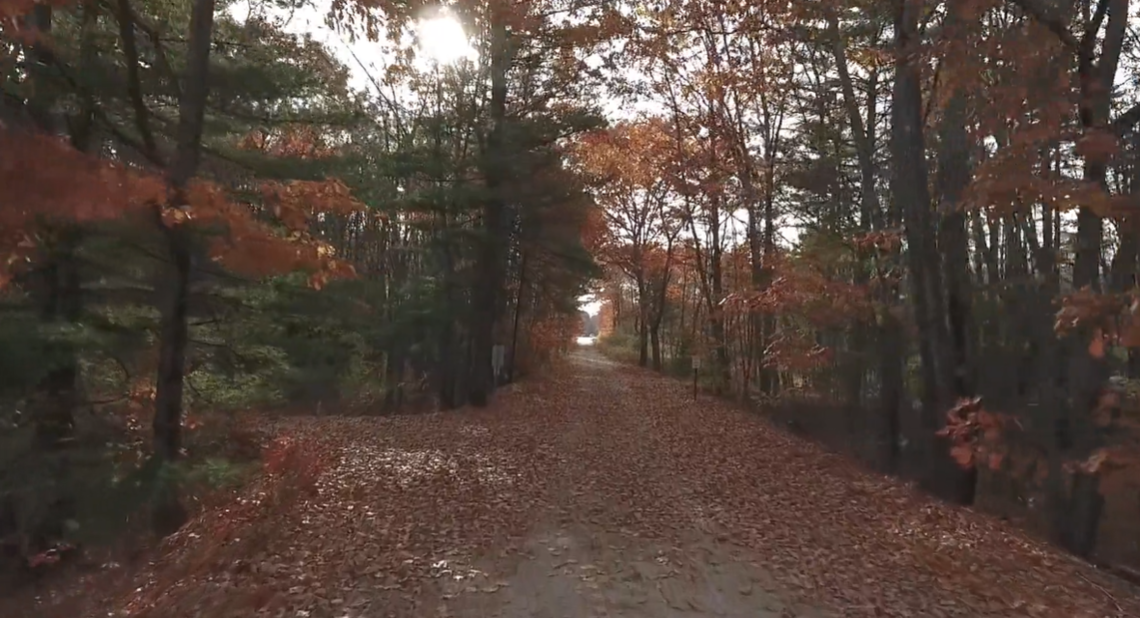 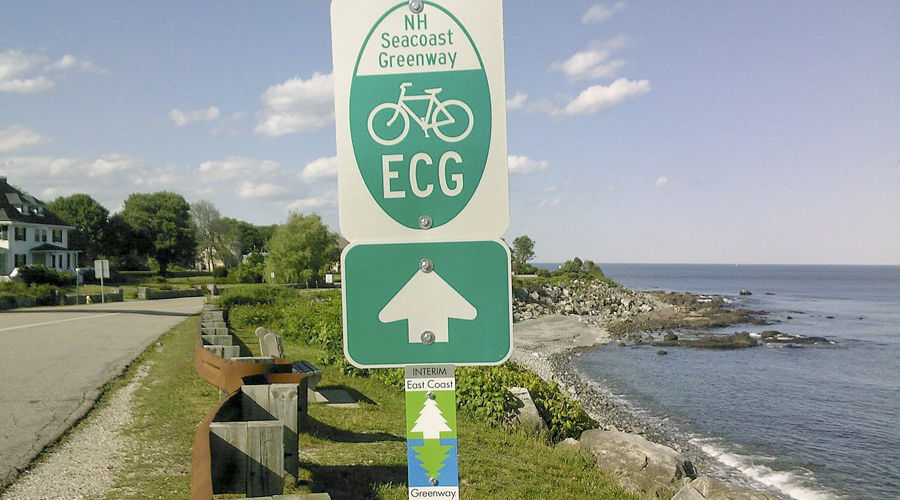 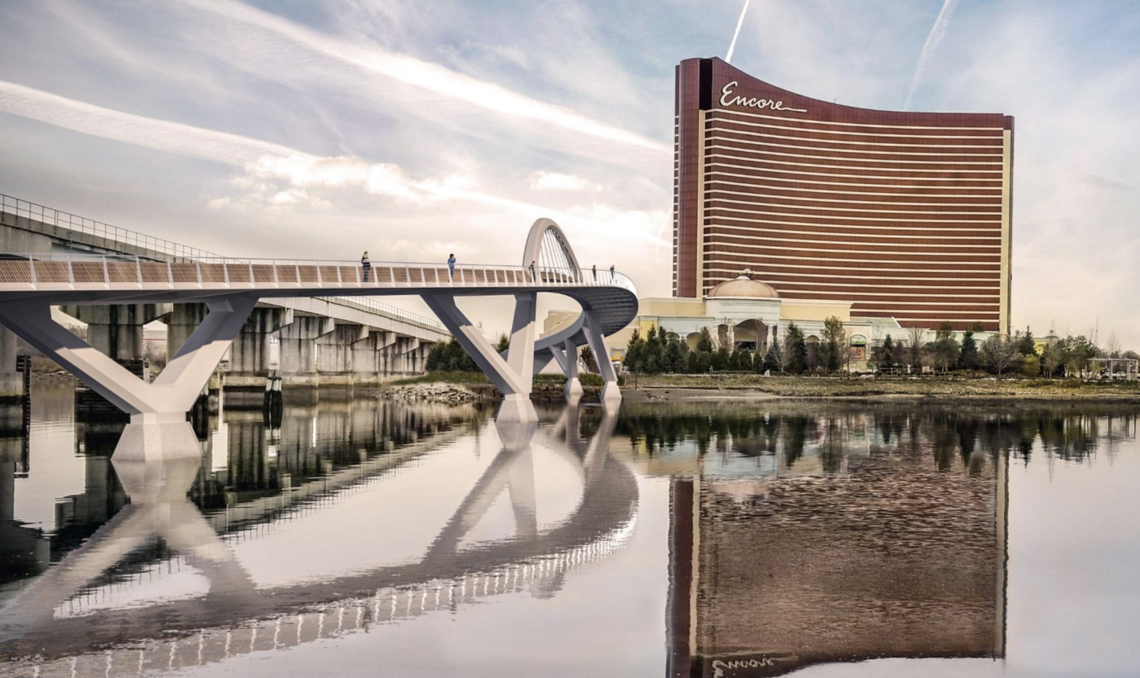 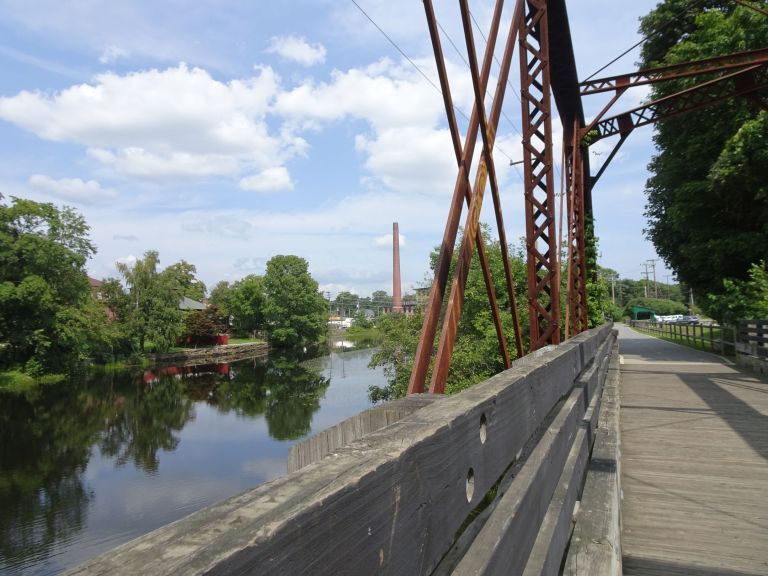 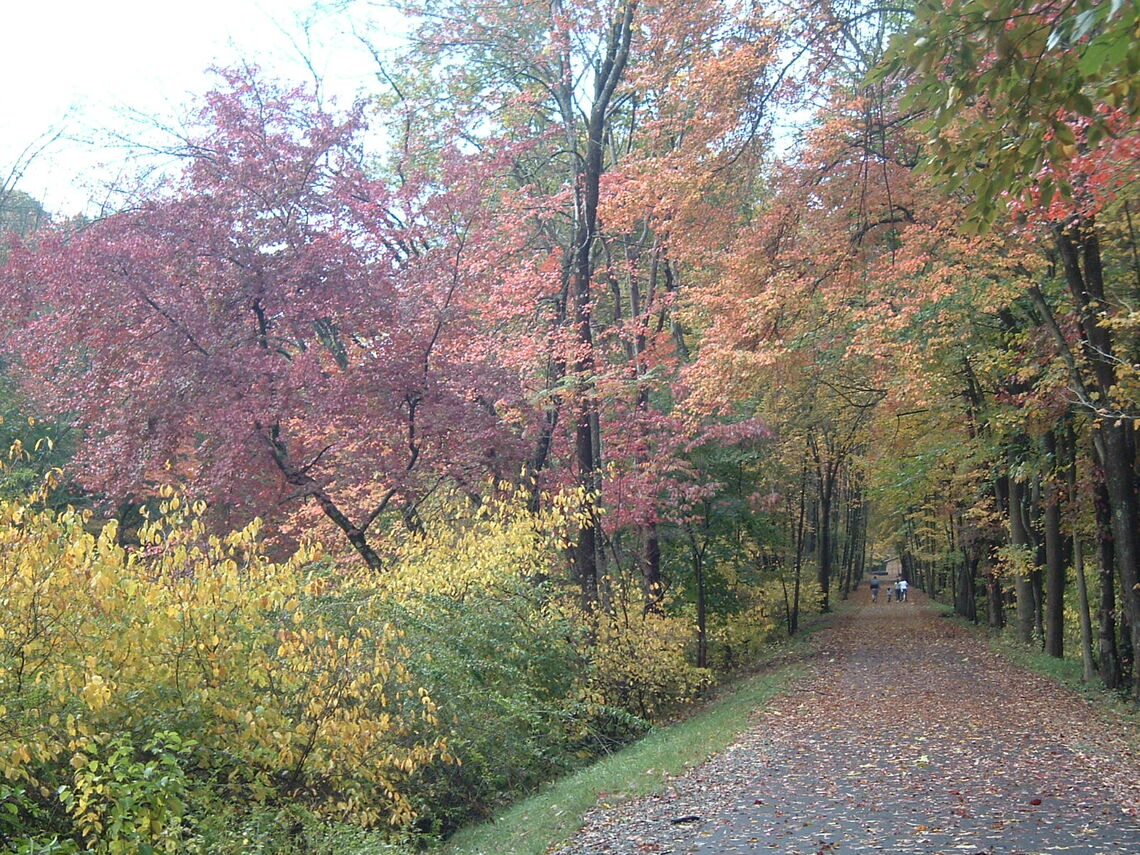 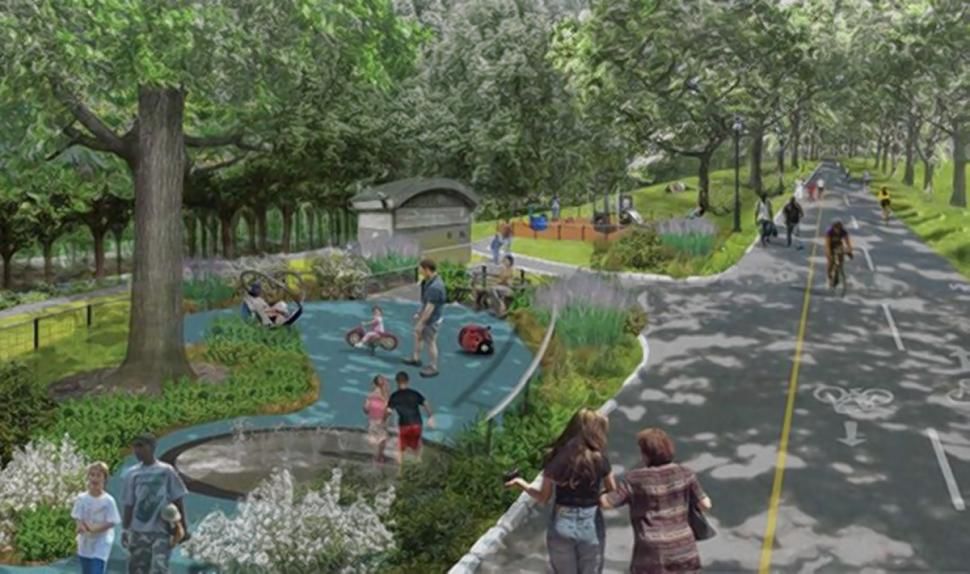 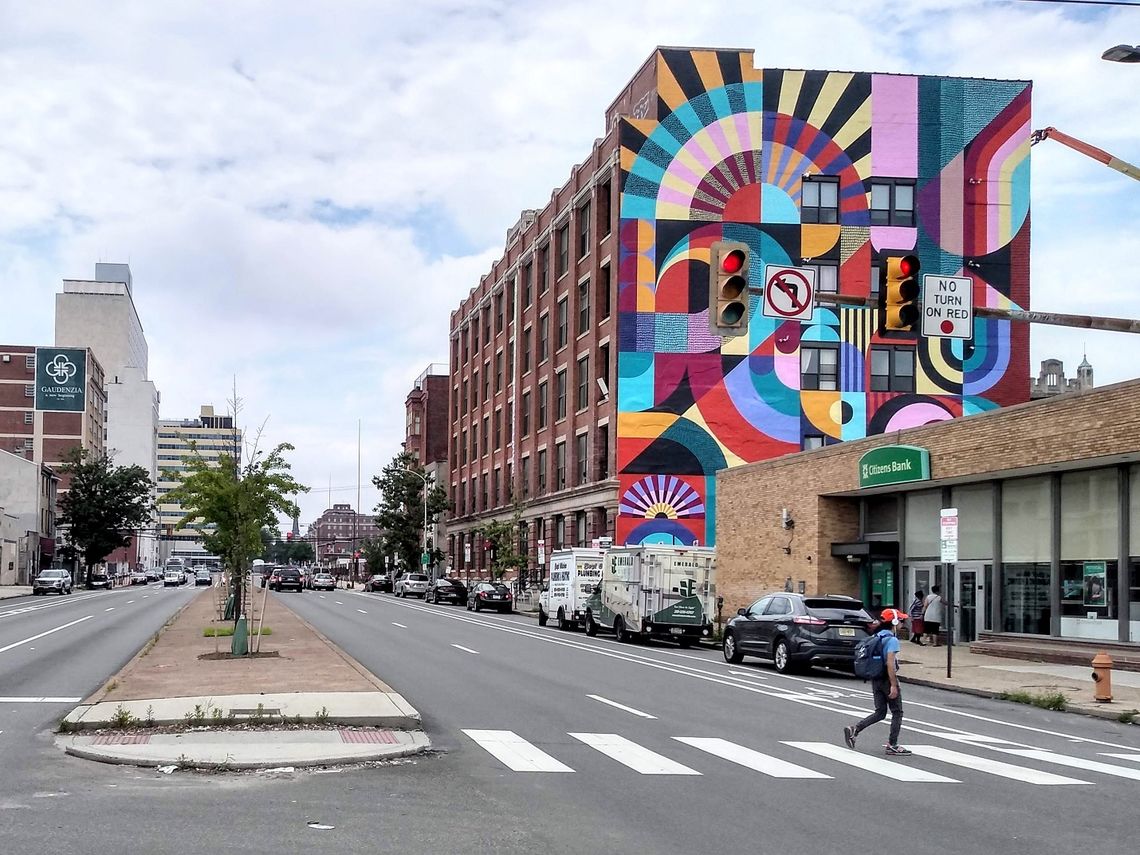 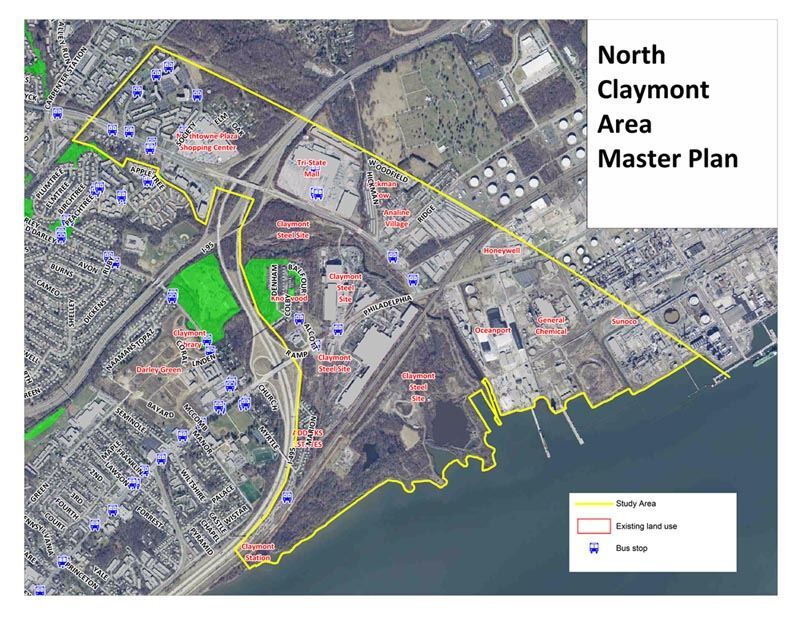 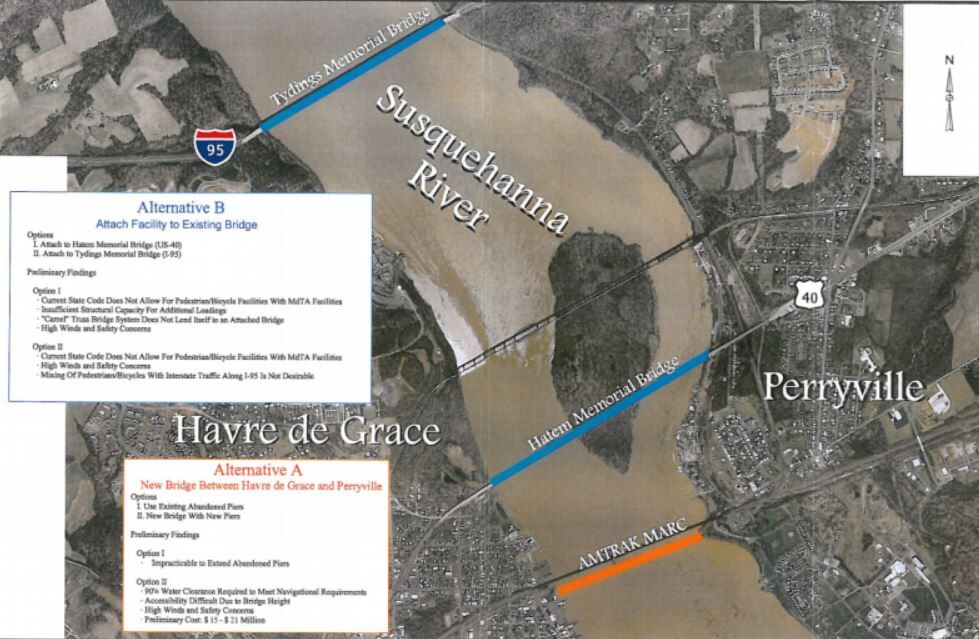 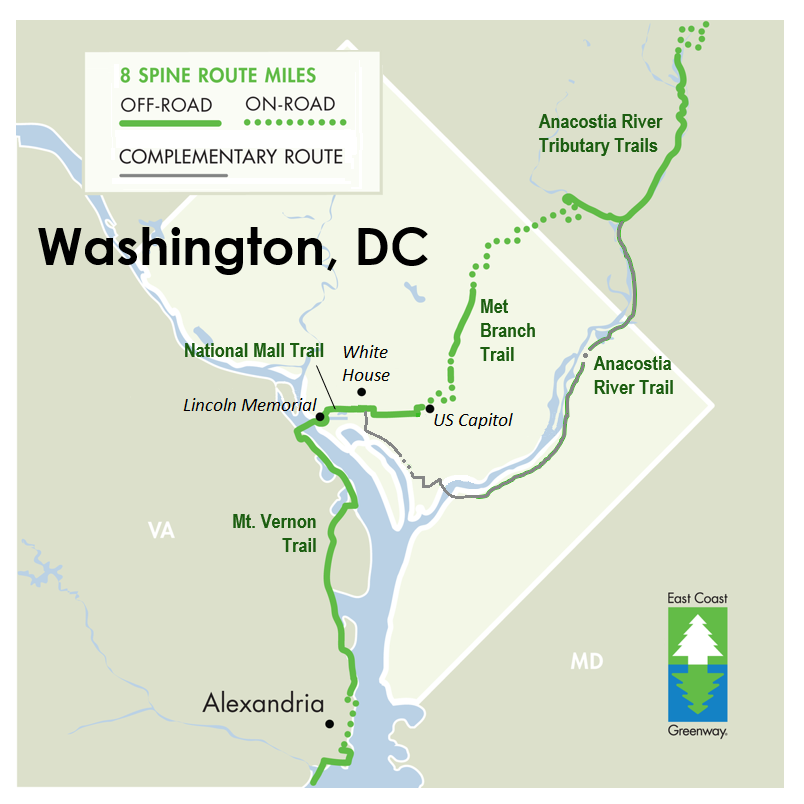 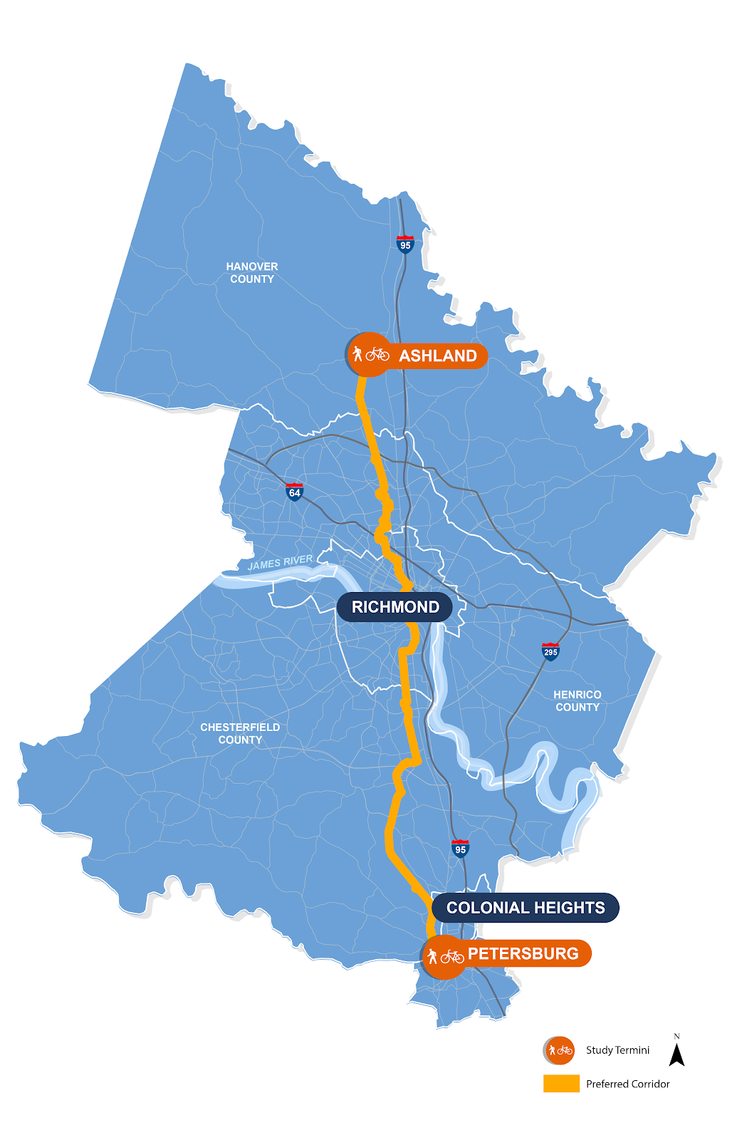 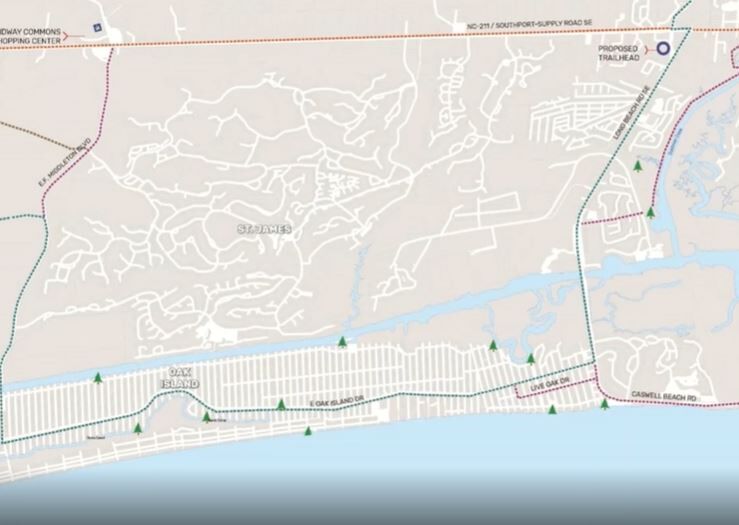 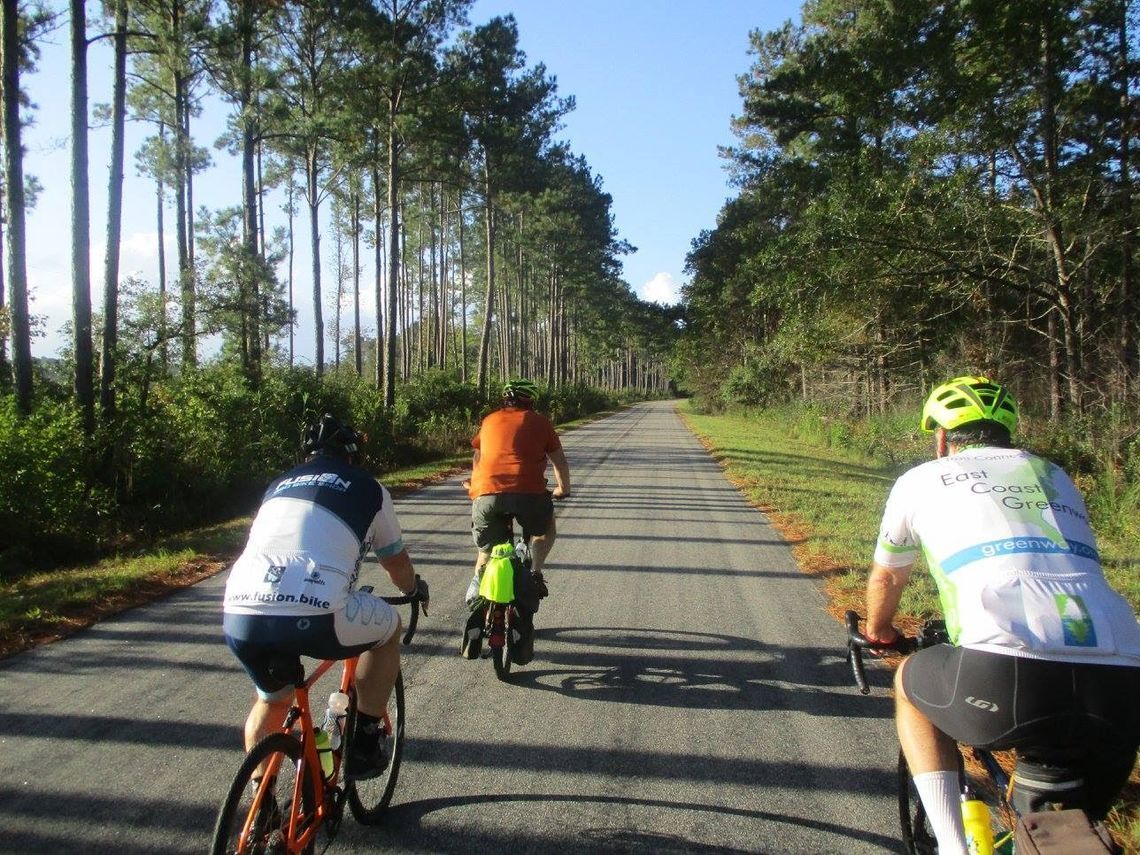 The Greenway in Georgetown, South Carolina, near the future Georgetown to Hobcaw Barony addition. 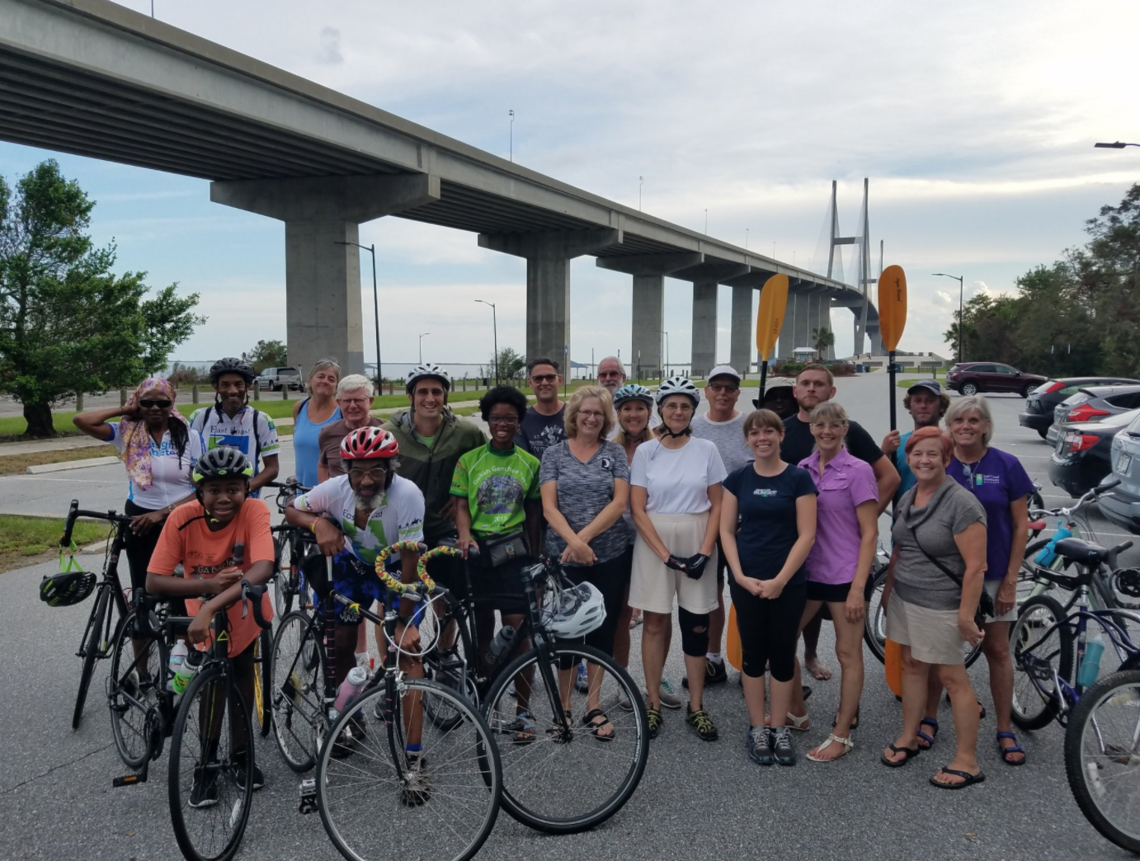 The Brunswick Trail, near the future Darien to Brunswick addition in Georgia. 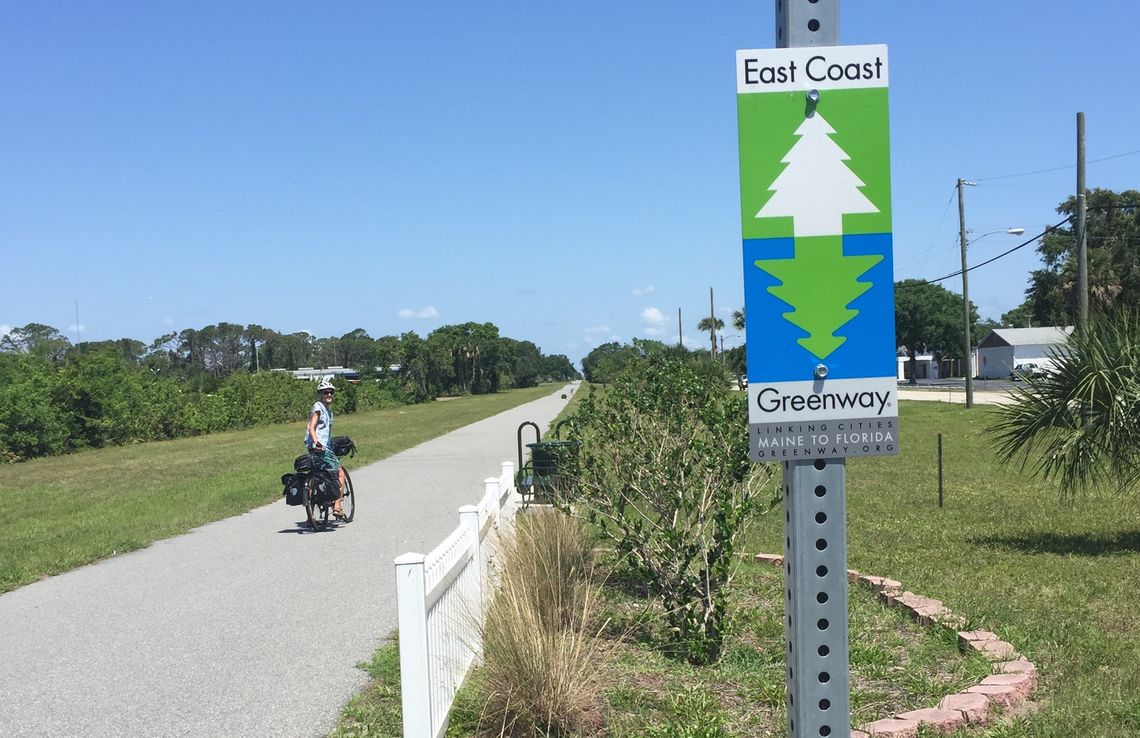 The Greenway in Florida, future home of the 50-mile Core to Coast route in Jacksonville.